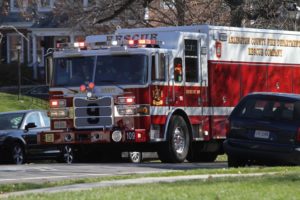 A construction worker had to be rescued by Arlington firefighters after falling through the back porch of a house in North Arlington.

The incident happened just before 1 p.m. on the 1300 block of N. Quintana Street, near Madison Manor Park and the Four Mile Run trail

A worker was reportedly jackhammering the porch when he fell through into some sort of concrete pit or recessed area. The man’s leg was pinned but the first arriving firefighters were able to extricate him before a technical rescue team arrived, according to ACFD spokesman Lt. Shawn Pendo.

The man suffered “minor injuries” — a broken leg, according to scanner traffic — and was transported to a local hospital, Pendo said.