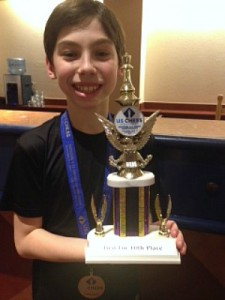 Chess prodigy Sam Schenk tied for 10th place in his division at the National K-12 Scholastic Championship chess competition in Orlando, Fla. He competed against 127 other players in his grade group to earn the ranking.

The annual competition is hosted by the U.S. Chess Federation. It separates participants by grade, and players only compete against people their own age. The grand prize is finishing first in a grade group and claiming the title of national champion.

Though this was Schenk’s fourth trip to the national tournament, it’s his first time taking home a prize.

“This was a great year for him, and this was absolutely the best he’s ever done,” Schenk’s parent Allison Rudoy said.

The 13-year-old is an 8th grader at Williamsburg Middle School in North Arlington. Rudoy said her son’s been playing chess since he joined an after school chess club at Jamestown Elementary five years ago.

“He kind of got hooked,” she said. “When the club ended, he kept with it and started studying on his own, reading a lot and playing in local tournaments.”

Now, Schenk is a part of the Arlington Chess Club where he practices what he studies, mostly playing against adults. He was also recently named one of the U.S. Chess Federation’s top 13-year-old chess players in the nation.

“He devotes an enormous amount of time to the study of chess and plays as much as he can,” Rudoy added. “It’s his favorite thing, but it’s not his only thing.”

While Rudoy said Schenk is very passionate about chess and would likely love to take home the top prize in Orlando someday, he is still young and anything could be in his future.

“All I know for sure is as long as he’s still interested in chess, his family will keep supporting him,” she said.