Arlington County released its year end video this week, highlighting how the community has progressed over the last twelve months.

The video, titled “Our Path Forward,” begins with County Board members reflecting on a difficult 2014 and being able overcome various challenges — unspoken but implied: the cancellation of Arlington’s planned streetcar project.

“Last year, we had some distractions,” said Jay Fisette. “We had a lot of angst in the community.”

Libby Garvey shared concerns over whether the Board could effectively address those tensions this year.

“There were a number of challenges facing us,” she said. “Can we properly manage change? That was a reasonable concern and definitely a challenge.”

The video addresses six different areas in which the county has seen change over the last year and how they overcame such challenges. 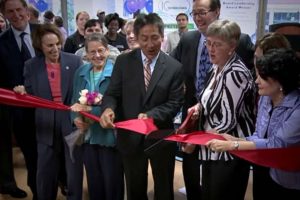 One of the most prominent of those is housing. In the video, Board members cited the recent approval of the redevelopment of Arlington Presbyterian Church into affordable housing and the opening of the Homeless Services Center as major improvements in that category.

“Being there for the opening of that center was one of the highlights, by far,” Walter Tejada said in the video. “Frankly, if there’s a community in the United States of America that has a chance of ending homelessness, Arlington is it.”

The video also highlighted public-private and public-public collaborations the County established in the last year, including the Ballston mall renovations those that are still developing, like the land sale or swap with Virginia Center Hospital.

“It is all about partnership and how we can work together in a cooperative and synergistic fashion,” John Vihstadt said. “The County Board and the School Board are also working much more collaboratively than they have in the past.”

Board members also cited this year’s Community Facilities Study as the basis for positive changes in the way the county engages with the community — and plan to use its results moving forward.

“That process was the epitome of what we can do and do well as a community,” Fisette said.