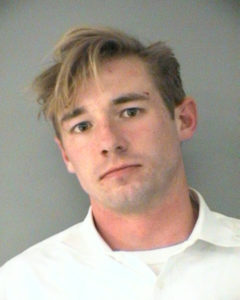 A man was arrested early Sunday morning after allegedly doing lines of cocaine off of a table at Goody’s restaurant in Clarendon.

The incident happened just before 3 a.m. Police say 26-year-old William Donovan of Vienna, Va. was sitting by himself at a table in the tiny pizzeria, snorting cocaine. A uniformed Arlington County police officer who was standing nearby witnessed the alleged drug use and went to arrest Donovan.

At that point Donovan, who police say was highly intoxicated, defiantly said something to the effect of “I’m going home tonight,” and took a “fighting stance,” according to ACPD spokesman Dustin Sternbeck.

Donovan began kicking and punching the officer, prompting a witness to jump in and help restrain him while additional officers sped to the scene, Sternbeck said.

Donovan was charged with possession of cocaine, two counts of assault on a police officer, resisting arrest and obstruction of justice, according to Sternbeck, and is being held without bond.

He “eventually apologized while being transported to jail,” Sternbeck noted.