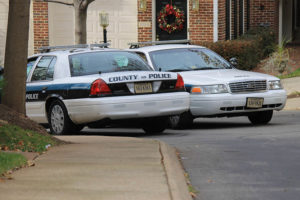 (Updated at 1:45 p.m.) A lobbyist has been charged after allegedly threatening to kill a technician who was fixing his computer.

The incident happened around 11 a.m. Monday, at the suspect’s house on the 2700 block of S. Grove Street in the Arlington Ridge neighborhood, near Crystal City.

Police say 50-year-old Joseph N. Mondello “refused to let a computer technician leave the residence until his computer was fixed.” Mondello also “allegedly had a gun in his possession and threatened to kill the victim,” according to an Arlington County Police Department crime report.

Mondello, who’s a registered lobbyist, was charged with abduction by force or intimidation and use of a firearm in a felony, according to court records. The abduction charge can carry a sentence of anything from a couple of months in jail to up to 10 years in prison.

According to Arlington County Police spokesman Dustin Sternbeck, Mondello had a previous “run in” with another computer technician, but that encounter did not escalate to the degree of this latest incident.