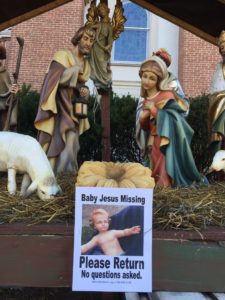 A church near Crystal City is praying for the return of Christ, after a porcelain figure of the baby Jesus was stolen from its nativity scene over the weekend.

Baby Jesus was stolen from outside Calvary United Methodist Church (2315 S. Grant Street), in the Aurora Highlands neighborhood, sometime between 8 p.m. Saturday and the next morning, when parishioners showed up for Sunday worship services.

Police were called and took a report Monday, though hopes of cops catching the perpetrator are low. Rev. Matthew G. Smith said he’s hoping the thief has a change of heart and repents — by returning the Son of God to his rightful place in the manger, at least until the nativity scene is brought inside next weekend. Alternatively, the little Lord could also be left on the front steps of the church or brought, in person, to the front office.

“We have no desire to prosecute,” Smith said. “We would be very happy just to get Him back.”

(No other nativity thefts were reported this year in Arlington, according to an ACPD spokeswoman.)

This was the third time Jesus had been swiped from the church’s nativity scene, and if all works out it wouldn’t be the first time He has been returned, Smith said. The first time, years ago, Jesus mysteriously reappeared in the nativity scene on Christmas morning.

The last time, a few years back, baby Jesus vanished for good. A parishioner ended up ordering a new, hand-painted figure of the young Prince of Peace from Italy and donated it to the church as a replacement. 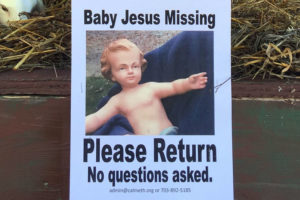 Before the nativity scene was put on display a few weeks ago, in mid-December, Smith and some church members discussed ways to prevent theft. The nativity scene itself is bolted down, but the Italian baby Jesus is too fragile to be secured in a permanent fashion. While many ideas were proposed, the one that was implemented involved tying fishing line around the porcelain figure. That did not save the Savior; the fishing line was cut by the thief.

Smith said he expects there to be more discussion of nativity security ahead of 2016’s Christmas season. Should the Christ child not be returned, the church will also have to consider raising funds to buy a new one. The pastor said he wasn’t sure of the cost of a new porcelain baby Jesus, but said of the Italian-made model that was stolen, “I’m certain it’s not inexpensive.”

“We will look for ways next year,” to secure baby Jesus, he said, “but we don’t want to chain him in.”

Either way, said Smith, “it’s not going to sour our love of the community or our mission.”