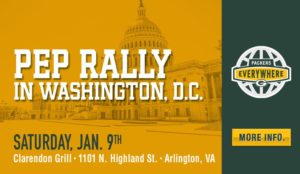 They may be in enemy territory, but “cheeseheads” from the D.C. area and around the country will be showing their Packers pride in Clarendon this weekend.

A pre-gameday pep rally will be taking place at Clarendon Grill (1101 N. Highland Street) this Saturday at 6 p.m. The free event is being hosted by Packers Everywhere, an organization that unites Packers fans in locales far from the frozen tundra of Lambeau Field.

Packers President and CEO Mark Murphy will greet fans as they arrive, as well as participate in a question-and-answer session with radio sportscaster and “voice of the Packers” Wayne Larrivee.

Larrivee will also facilitate a discussion between former players Nick Collins and Nick Barnett about Sunday’s matchup with the hometown Washington Redskins. Finally, Packers.com bloggers Vic Ketchman and Mike Spofford will preview the game and give their predictions.

Food and drink will be available for purchase — and yes, Miller Lite, the official beer of the Packers, is on tap. There will also be several fan giveaways.

The pep rally is a precursor to Sunday’s wild card playoff game against the Redskins, which kicks off at 4:40 p.m. on Fox.