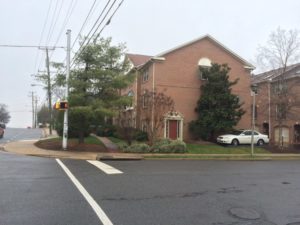 (Updated at 3:55 p.m.) Police have released new information about an attack in Lyon Village that sent a man to the hospital with a serious head injury.

Arlington County Police say that the victim, who was struck in the head with a bottle, was a homeowner who discovered a man in his house during a residential burglary.

The incident happened around 10 a.m. on the 1800 block of N. Adams Street, near the intersection with Lee Highway.

Police say the victim was at home during the break-in, but at first didn’t hear the suspect. When he discovered the burglar in the house, he confronted him and a struggle ensued in the kitchen.

During the struggle, the suspect grabbed a bottle and hit the victim over the head with it, causing a “severe laceration,” according to Arlington County Police spokeswoman Ashley Savage. The suspect then fled on food.

The homeowner, bleeding profusely, made his way to a neighbor’s house. The neighbor then called police to report the assault.

The victim was transported via ambulance to Virginia Hospital Center with what’s described as a non-life-threatening injury. Police found a large amount of blood on the ground, including on the neighbor’s front step, and recovered a pair of bloody gloves, according to scanner traffic.

Police are still investigating the incident but currently believe that the attacker did not know the victim. The suspect is described as a 5’7″ black male in his 50s.

Earlier in the investigation, police said that they believed the victim was struck while walking down the street.