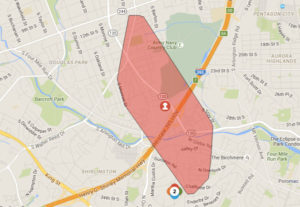 At least 2,700 Dominion customers are without power in South Arlington tonight.

The power went out as winds whipped up in advance of a brief period of snow around 7:15 p.m. Via Twitter, one resident reported the sound of a likely transformer explosion.

The power outage is affecting residents around Nauck and other areas around S. Glebe Road, south of Columbia Pike in Arlington, and around W. Glebe Road in Alexandria. Residents of Fairlington and other nearby neighborhoods reported that power was flickering around the start of the outage but quickly came back on.

According to the Dominion website, power is expected to be restored at some point between 9 p.m. and 2 a.m.