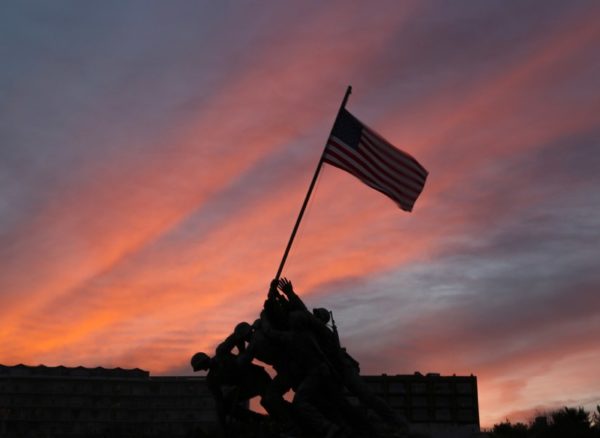 Another Roll-Over Crash on I-66 — Last night, around 3 a.m., an SUV that was being chased by police overturned after exiting I-66 at East Falls Church. At the same time, another roll-over crash happened on the Fairfax Drive ramp to westbound I-66. A vehicle flipped over as a result of a crash involving it and another vehicle. [WTOP]

Planned Power Outage at Courthouse Plaza — Businesses and elevators at the Courthouse Plaza shopping center will be without power from 3 a.m. to noon Saturday as part of scheduled electrical work. Among the businesses affected will be the AMC movie theater and the Starbucks. [Twitter, Twitter]

Retired Arlington Marine Dies at 103 — A retired Marine who lost his arm in a shipboard explosion in 1937 has died at the age of 103. Pvt. Clyde Byrd died at Virginia Hospital Center following a heart attack. A police and motorcycle club-escorted funeral procession brought Byrd to his final resting place at Quantico National Cemetery in Triangle, Va. [InsideNova]

Last Weekend for Synetic Show — This weekend is your last chance to see a reimagined version of Shakespeare’s As You Like It performed at Synetic Theatre in Crystal City. [Washingtonian, Synetic Theatre]