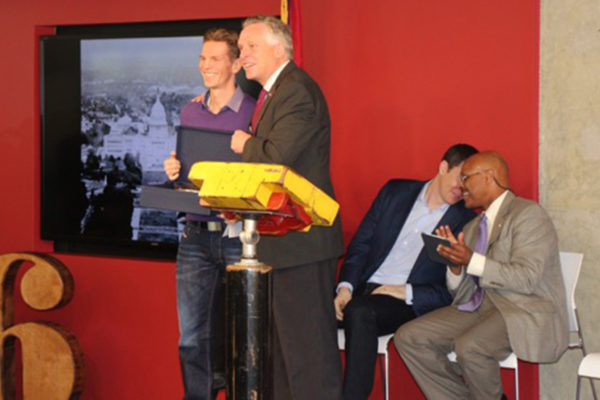 Arlington’s population of engineers and project managers will grow by 100 by 2017 as San Francisco-based disruptive technology firm Shift builds a technology operation in Crystal City.

Virginia Gov. Terry McAuliffe announced today that Shift will invest $20 million in its East Coast engineering center in Arlington as part of its national expansion. The announcement was made during a reception at Crystal City business incubator 1776, where the company will have its local headquarters.

Shift executive Toby Russell said the company’s disruptive technology does for the automotive industry what Airbnb does for hotels. “We use technology to make buying and selling cars easy and delightful,” he said. Consumers input information about the car they want to sell into the Shift website, get a quote, have their car picked up by a Shift employee and then receive a check when the car sells. Shift handles paperwork, test drives and price negotiations.

Russell, who is originally from Alexandria, said he would like to see the Shift “serve as a bridge between Silicon Valley and Virginia. We believe this kind of bridging is what technology expansion [in the region] needs.”

Russell added that it was McAuliffe’s visit to the firm’s California headquarters that convinced them to build the engineering center in Virginia.

Arlington County Board Chairman Libby Garvey, in presenting a key to the county to Russell, applauded the arrival of a technology company as federal spending in the region winds down.

“Arlington is in the midst of a surreal change,” she said. “Having our buildings filled with federal agencies is a thing of the past.”