I’d like to apologize to the two readers of my column; due to the panic of the blizzard, there was no time to write a serious article. So I decided to share our blizzard growler fill list. Don’t be stuck at home during the blizzard without fresh beer.

Draft only, not available in bottles. Highly rated IPA from Charlottesville.

Ocelot is straight up hot and becoming a favorite of  VA/DC craft beer drinkers. Get this while you can because this IPA is a one-off. Once it’s gone, it’s gone.

Starbucks will be closed this weekend. Wake up with this brew and keep your eyes peeled for the barrel aged version coming soon.

Winner of the GABF Gold medal for French and Belgian style Saison.

We’ve been aging this keg for almost a year waiting for it to hit its prime. That time has come. 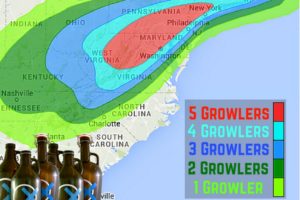 We will always offer a great local IPA 64-ounce growler for around $10. The Corruption is an easy choice.

Another sick IPA. Abyss — their famous limited bourbon barrel imperial stout — is coming to Dominion Wine and Beer soon. You will want a bottle.

The last keg left of Victory at Sea day hosted at Dominion last week. Get it while it lasts.

Another new local brewery out of Winchester. There’s a reason why it’s called “Growler” Kolsch. One person can easily pound a growler in one sitting of this crisp refreshing brew.

A big boy stout that should be enjoyed during a blizzard.

END_OF_DOCUMENT_TOKEN_TO_BE_REPLACED

More Stories
Reagan National Airport Calm Before Potentially Historic StormLetter to the Editor: Five Ways to Help Others During the Blizzard