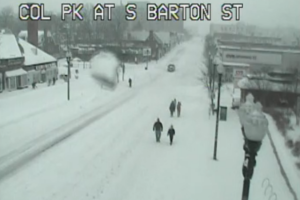 (Updated at 7:55 p.m.) The federal government will be closed Monday, the Office of Personnel Management announced Sunday evening.

The feds join Arlington County government and public schools in closing Monday due to poor road conditions. Many neighborhood streets remain treacherous, covered with snow and ice that plows have yet to remove.

Arlington County trash and recycling collection service has been cancelled Monday and Tuesday.

ART bus service will be running sporadically Monday. The transit service says ART 41, 51, and 55 routes will run every 30 minutes from noon to 5 p.m. Monday. Other routes will remain suspended.

The National Park Service announced Sunday that the northbound GW Parkway would remain closed between Spout Run and the Beltway until at least noon on Monday.

*FEDERAL OFFICES* in the Washington, DC area are *CLOSED*. Emergency and telework-ready employees required to work must follow their agency’s policies, including written telework agreements.

/*Non-emergency employees*/ will be granted excused absence (administrative leave) for the number of hours they were scheduled to work unless they are:

* required to telework,
* on official travel outside of the Washington, DC area,
* on pre-approved leave (including leave without pay), or
* on an alternative work schedule (AWS) day off.

/*Telework-Ready Employees*/ who are scheduled to perform telework on the effective day of the announcement or who are required to perform telework on a day when Federal offices are closed must telework the entire workday or request leave, or a combination of both, in accordance with their agency’s policies and procedures, subject to any applicable collective bargaining requirements (as consistent with law).

/*Emergency Employees*/ are expected to report to their worksite unless otherwise directed by their agencies.

The press release from MWAA:

Reagan National and Dulles International will each have at least one runway open for flight operations beginning Monday morning, January 25.

We expect airlines to operate limited flight schedules at both airports throughout the day on Monday. Passengers should check with their airlines for information about their specific flights.

Snow crews at both Reagan National and Dulles International continue to work around the clock to clear runways, taxiways, roadways and parking lots in anticipation of the resumption of flights on Monday. Our priority is the safety of passengers and employees traveling to and from the airports. Travelers are encouraged to use caution when driving to the airports and plan extra time, as larger than normal crowds are possible.