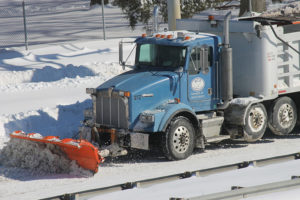 (Updated at 8:40 a.m.) Primary roads across Arlington County have been plowed and are at least somewhat clear of snow, the county announced last night.

The county has begun “phase three” of its snow removal process, during which workers will clear snow-covered neighborhood streets. Crews may take until Tuesday night to reach every street, the county said.

Though some major roads remain treacherous due to patches of ice, most traffic across the area appeared to be light or moderate with no major backups or road closures reported as of 8 a.m. this morning.

We appreciate your patience- we're making progress! This is a huge operation & it may take until Tues night to reach all the streets. #ARLwx

Want to know which streets are clear? Arlington’s snow plow map keeps track of where road crews have and haven’t been. And starting at noon today, residents can use the county’s snow reporting form to “identify snow issues that need attention.” Residents can also report issues by calling the streets hotline at 703-228-6485.