Oates’ solution is a virtual reality mobile application called CapApp. Still in development, the app will contain the history of the building and give guests a closer look at the artwork and artifacts in it. This includes the frescos that cover the inside of the rotunda, which loom nearly 200 feet above Capitol visitors’ heads.

The 23-year-old wanted to put all this information in the hands of the people when he realized not everyone who visited the Capitol was having an equal or even enjoyable experience. After speaking to both tour guides and visitors after their tours, Oates observed people in the Capitol were mostly neutral about their time there.

“I loved the time I spent on the hill, so it was unfathomable to me that anyone had a less than perfect experience,” he said. “It was upsetting. It prompted me to talk to people more to find out what the issues really were.” 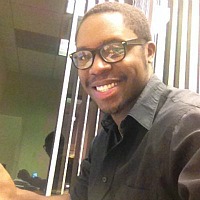 One of Oates’ responsibilities as an intern was giving constituents tours of the Capitol, so he started to feel for himself what the tours were missing.

“As interns, we felt really embarrassed when we took out our notebooks or when someone asked a question we felt like we couldn’t answer,” Oates said. “I knew there were problems with the quality of information given and the quality of the tours themselves.”

“Then I thought, if this was all in an app, pulling out a phone to quickly find information that was accurate and share it would be much less cumbersome,” he continued. “I thought an app lent itself to an easier retelling of information and would greatly improve the overall experience at the Capitol.”

Now living near Shirlington, Oates is continuing work on building the app with developers. Much of this work has been trial and error as it’s the finance and philosophy major’s first thorough venture into technology.

“For the last year or so, I’ve taken every chance I get to learn the basics of coding or network with people in the business so I can better communicate with my developers and make the app as comprehensive as it can be,” he said.

Eventually, the CapApp will also be customizable for tourists, staff members and student groups alike. Oates believes these personal features, the virtual reality element and the instant accessibility to everything in the Capitol will put his app bounds ahead of the existing visitor guide apps coordinated by the Architect of the Capitol.

More than that, Oates said the decisions he made while creating the app were all based on accounts of tour guides he grew close to. He said he continues to make frequent trips to the Capitol to get feedback from these people, who have become reliable friends. 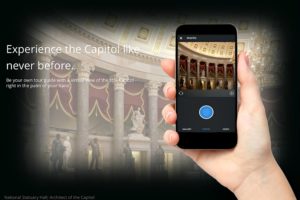 “When I first had the idea, it was because I needed it and knew it would be helpful,” he said. “But this app quickly became more than that. It was built based on the stories of all the people who could use it best, and their suggestions have been incredibly helpful.”

“It’s a really exciting project for me, and it’s been a good three weeks,” Oates said. “The results of this Kickstarter campaign will help me figure out where to go next. The possibilities for the app are great, and I’m excited to see where it goes next.”

When it’s first released — which Oates hopes will be sometime this year — CapApp will be free and available for iPhone.