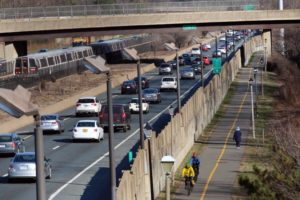 Eastbound I-66 will be widened to three lanes inside the Beltway to Ballston, under a compromise agreement announced by Virginia Gov. Terry McAuliffe (D) this morning.

The compromise is intended to appease lawmakers from outside the Beltway, many of whom opposed the idea of tolling I-66 without adding capacity to the often clogged highway. It’s likely to rankle some residents in Arlington, where in the 1970s a citizens group formed to oppose the construction of I-66 in the first place. That group now advocates for a “wiser, not wider” I-66.

According to various news reports, the compromise calls for eastbound I-66 to be widened to three through lanes between the Dulles Connector Road the Fairfax Drive/Glebe Road exit, within the existing highway right-of-way.

Outside-the-Beltway lawmakers, both Democrats and Republicans, were calling for I-66 to be widened before being tolled. The McAuliffe administration’s plan for converting I-66 to high-occupancy toll lanes inside the Beltway during rush hour — tolls for vehicles with 1-2 occupants, free to those with 3 or more occupants — was in danger of being blocked in the Virginia General Assembly without the compromise. The plan originally called for widening to be considered as a last resort, after studying the efficacy of the HOT lanes in improving traffic congestion.

“If we don’t take this deal now, it’s not going to happen for a generation,” state Sen. Barbara Favola said, as quoted by NBC 4.

Arlington County Board Chair Libby Garvey released a statement on the plan shortly after it was announced, expressing disappointment.

We are disappointed with the news of the amended plan for I-66, which will immediately widen I-66. We respect that Governor McAuliffe and his administration worked hard to protect the earlier plan, which delayed the widening of I-66 until we had several years’ worth of experience with multimodal solutions. We appreciate that — aside from the decision to widen immediately — many of the original elements remain intact:

As the new plan moves forward, Arlington will be vigilant, working to ensure that appropriate environmental analyses are completed efficiently and comprehensively. We will do all we can to mitigate harm from the widening, and we will explore possible improvements to accompany the widening. As always. Arlington will be working to promote improved regional transit. We need frequent, reliable, and comfortable transit systems along the east-west corridor that get people quickly to where they want to go.

Update at 3:00 p.m. — Rep. Don Beyer (D-Va.) has weighed in with an interesting statement, suggesting that Arlington County’s opposition to a partial I-66 widening, as proposed, may not be too strong.

Arlington County had a longstanding agreement that I-66 would not be widened inside the Beltway.  Today’s announcement by Governor McAuliffe changes that understanding, and with no public input so far.

My initial reaction is one of concern for Northern Virginians who have worked – many of them for decades – for an alternative approach to big highways.  But I continue to learn details of the proposal and to listen to constituents on all sides of this issue.

Early conversations with elected officials who represent Arlington County indicate that Arlington is more open to this partial I-66 widening than in the past, and that the potential benefits from I-66 tolls will bring important transit and multi-modal benefits to the surrounding corridor.  I remain dubious about additional asphalt, and await input from my Arlington and other constituents about today’s proposal.

Governor Terry McAuliffe and members from both parties and both chambers of the Virginia General Assembly announced today a bipartisan agreement to move forward on a plan to reduce congestion on I-66 inside the beltway by widening a four mile stretch from the Dulles Connector Road to Ballston, improving transit, and adding new options for single drivers.

The agreement will be reflected in the House amendments to Governor McAuliffe’s budget proposal after extensive negotiations between the Governor’s office, Delegate Jim LeMunyon and House Appropriations Committee Chairman Chris Jones. Republicans in the House of Delegates have also agreed to table legislation that would have precluded an optional toll for single drivers on I-66 inside the beltway, a key revenue source for planned transit improvements.

“This agreement is a big win for Virginia’s economy and for the commuters who spend too much time on the most congested road in the most congested region in the country,” said Governor McAuliffe. “After a spirited political debate last fall, and a series of productive discussions after the General Assembly convened, we are proud to announce a compromise that will move our plan to transform I-66 inside and outside the beltway forward. This multi-pronged strategy will increase options and reduce commute times through improved transit, smarter management of the lanes we already have and a new agreement for a wider roadway both inside and outside the beltway. I want to thank the bipartisan group of leaders who worked together to advance this important project so that we can unlock I-66, grow our economy and improve the quality of life of the commuters who use this road every day.”

“This agreement is another example of how the General Assembly and the Governor are working together to provide real solutions to the transportation challenges Virginians face every day,” said Chairman Jones (R-Suffolk). “After major investments in 2013  and innovative reforms in 2014 and 2015, we worked closely with Secretary Layne and his staff to find a practical solution to not only move the Transform 66 project forward, but to make it better for citizens throughout the congested I-66 corridor. The House budget will contain language and funding to immediately begin work on adding new lane capacity inside the beltway, a key concern from members of both parties. We appreciate the Governor’s willingness to discuss this important issue, and are grateful for the time and efforts of Secretary Layne and his staff.”

Transportation Secretary Aubrey Layne added, “This plan will significantly improve the I-66 corridor by moving more people with fewer vehicles, giving solo drivers the option to stay on the road and pay a toll during the peak travel times and increasing carpools, buses and transit in the corridor.  We will also begin the process to widen the road at a key bottleneck inside the beltway that will add further capacity without requiring the loss of any existing homes or businesses. This is a comprehensive plan that will ease congestion, support smart growth and advance the Governor’s goal of building a new Virginia economy.

“This bipartisan agreement will ease congestion and stimulate economic growth that will benefit the entire Commonwealth,” said Senator Hanger (R-Augusta). “I am proud of the way in which leaders of both parties and both branches of government were able to sit down and find a way forward on this important project.”

“My colleagues and I made the case for widening I-66 inside the beltway,” said Delegate LeMunyon (R-Fairfax). “I’m glad there is now consensus on the need to do this as soon as possible. This is a step forward in our efforts to address the gridlock on I-66 within the limits of current budget resources. I look forward to taking additional steps to reduce congestion in this key corridor.”

Senator Barbara Favola (D-Arlington) added, “I appreciate the bipartisan commitment to find a compromise that preserves the I-66 transformation, including the multimodal improvements​ such as commuter bus services and facilitating carpooling options​ that are so critical to reducing commuting times for the people of this region.”

The work to start widening of eastbound I-66 from the Dulles Connector Road to Ballston will commence this year with an environmental assessment.  Construction work will start in 2017 and the new lane will be open to traffic in 2019. This construction will take place within the existing right-of-way, will not take any homes and will be designed in a context sensitive manner.

The expected benefits of the project include the following:

Extensive studies performed over the past several administrations in Virginia show a combination of dynamic tolling and multi-modal improvements will provide a faster and more reliable trip on I-66 inside the beltway during peak travel times, providing a minimum reliable speed of at least 45 miles per hour.