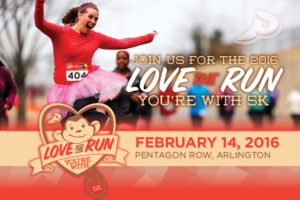 Singles, couples and members of the “it’s complicated” crowd are set to converge on Pentagon City for a Valentine’s Day-themed 5K and party this weekend.

Pacers Running’s “Love the Run You’re With” race is scheduled to take over parts of S. Joyce Street and Army Navy Drive Sunday morning. The 5K kicks off at 9 a.m. and begins and ends at Pentagon Row.

Doubling as a matchmaking affair, the race uses bib numbers that correspond to runners’ relationship statuses. Racers can register as single (“Stupid Cupid”), it’s complicated (“Love ’em or Leave ’em”) or in a relationship (“Co-Dependent”).

From 7 to 11 a.m., the Arlington County Police Department plans to close:

Registration is $45 online and includes a blanket — one you’ll probably need with the frigid temperatures. Following the 5K, runners can head to Champps at 1201 S. Joyce Street for a post-race party that will have an awards presentation and a karaoke contest.