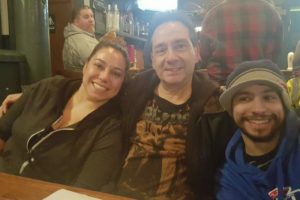 Tiffany Joslyn, an attorney and Arlington resident, was killed in a car crash in Rhode Island on Saturday.

Joslyn, 33, and her 28-year-old brother, Derrick, were killed after a car driven by Derrick’s wife was reportedly sideswiped on I-95 near the city of Pawtucket. The initial collision caused the Joslyns’ car to lose control, strike the center median and roll onto its roof. It was then struck by a van, reported TV station WPRI.

Tiffany is being remembered as a strong advocate for progressive and LGBT causes. She was on the board of local LGBT group AGLA, was a past president of the LGBT Democrats of Virginia PAC, and was active in the Arlington Young Democrats and the Arlington County Democratic Committee.

Friends, acquaintances and local organizations alike have been posting tributes to Joslyn on social media.

“Tiffany was an incredible advocate for progressive candidates,” wrote Democratic activist Ben Tribbett, “even though she didn’t always like the politics because she really cared about the issue outcomes and the real impact policy has on people’s lives.”

We could go on and on about how Tiffany Joslyn touched Arlington and Virginia. We encourage you to share your stories and memories with us.

Joslyn’s name could often be found among the list of endorsements for local candidates. Among the candidates for elected office she endorsed were former Delegate Rob Krupicka, former state Senate candidate Jaime Areizaga-Soto and Arlington County Board member John Vihstadt.

Professionally, Joslyn worked as a deputy chief counsel for a U.S. House of Representatives subcommittee.

A friend of Joslyn’s, Stephanie Clifford, has created a GoFundMe campaign to help raise money for her family and for her cat. The cat was injured in the crash and may need to have her leg amputated, Clifford wrote. So far, nearly $6,000 has been raised.

Below is a video of Joslyn speaking about LGBT causes at County Board member Jay Fisette’s house in 2011. The video was originally published by the Blue Virginia blog.

“At the end of day we are partisans,” Joslyn told the gathered crowd, “but equality is a non-partisan matter.”