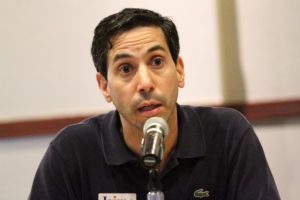 Last week, we asked the two Democratic candidates for the 31st District state Senate seat to write a sub-750 word essay on why the district’s residents should vote for them on Tuesday.

Here is the unedited response from Jaime Areizaga-Soto:

I am Jaime Areizaga Soto and I’m running to represent the 31st district in the Virginia Senate.  I graduated from Georgetown and got a masters and law degree from Stanford.  I’ve served our country as an Army officer for over twenty years and am currently a JAG Lieutenant Colonel in the National Guard.  I am an attorney with over 12 years of infrastructure experience, a former White House Fellow, a member of the Arlington County Transportation Commission, and a lifelong Democrat.  Over the past two General Assembly sessions in Richmond, I served as Policy Advisor to Senator Whipple supporting and advising her on legislation and caucus-related matters.  The Obama Administration appointed me to the Office of the General Counsel at the U.S. Agency for International Development – I stepped down from that position in order to be a candidate to represent you in Richmond.

I fell in love with Virginia when I was here visiting my family thirty-five years ago.  My heart is in Northern Virginia for it’s progressive values, diverse communities, and our shared commitment to education, equality, and justice.  I believe everyone should have the opportunity for a world-class education, the opportunity to seek justice and have a voice and the opportunity to succeed and thrive.  Some people think these values should not extend to everyone.

I am 100% Pro Choice and always have been.  NARAL Pro Choice Virginia has endorsed me.  As a member of the military I am honored to serve alongside members of the LGBT community and I will fight for full equality for all Virginians; the LGBT Democrats of Virginia have also endorsed my candidacy.  I will also stand up for our labor brothers and sisters and am proud to have the endorsements of the Arlington Professional Firefighters and Paramedics Association and of the Communications Workers of America.

My priority in the Senate will be to fight for our Northern Virginia communities and to stand up for our shared Democratic values.  I will fight for progressive tax reform that cuts taxes on the middle class and small businesses, eliminating the sales tax on food and creating tax brackets so the super rich pay their fair share.  It is clear that our transportation system is broken; we need to focus on moving people and goods safely and reliably instead of on moving cars.  I support raising the gasoline tax to equal that of our neighboring states.  I grew up with an elementary school teacher as my mother and I believe that our teachers should be paid at the average of the rest of country.  I will buck any further cuts to education and fight for equitable teacher pay.

I am a native-born American citizen raised in Puerto Rico who has lived the American Dream.  I am an Eagle Scout and serve as Vice President of the Dream Project, a not-for-profit that supports high school students in achieving their college goals.  I will make sure every law-abiding resident is treated fairly and has opportunities to succeed by providing in-state tuition to the children of immigrants who graduate from Virginia high schools (Dream Act).

I will be a strong voice for our Democratic values in Richmond.  I am ready to work for you on day one.  You have my word.  I will not quit or give up.  We cannot stand by and watch the McDonnell/Cuccinelli agenda destroy our state and our future.  I ask you for your vote.  Join me.  Together we can make it right.