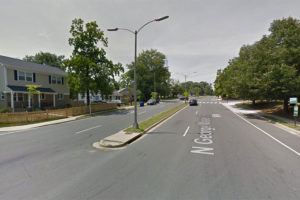 The southbound lanes of a portion of N. George Mason Drive will be closed to traffic during the evening rush hour.

Southbound traffic is being detoured between Patrick Henry Drive and 20th Street, just south of Lee Highway, according to the Arlington Dept. of Environmental Services. The closure is due to emergency water main repairs, said an Arlington Alert email.

Separately, Marshall Drive remains closed tonight near the Iwo Jima Memorial due to a sinkhole reported this morning. Repairs to the roadway are still underway, according to scanner traffic.

Crews are working to repair a sinkhole on Marshall Drive next to Iwo Jima Memorial. Road closure in effect. pic.twitter.com/qHwp8rhH2C