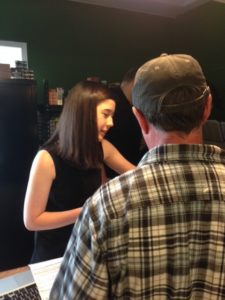 A teenage girl in Arlington is banking on Americans’ love affair with guns remaining strong for years to come.

The public turned out in big numbers to check out the inventory in Pratte’s store. Officials from the National Rifle Association, headquartered in Fairfax County, and the Virginia Citizens Defense League, a pro-gun organization, also showed up to celebrate the store’s opening.

The popularity of guns in the United States has never been stronger. More Americans own guns today than ever before. The strong demand for guns is excellent news for gun retailers like Pratte. Black Friday 2015 was the single biggest gun-purchasing day ever in U.S. history, with more than 185,000 background checks processed by the FBI.

Although only 16, Pratte had long considered the idea of owning her own business and controlling how it is run. Pratte chose to open a gun store largely due to her father’s experience as a gun store owner.

“When I brought up the idea to my dad, he was really supportive and he was all for it, willing to help me open this and run it. I’m very excited about the future for this,” Pratte said in an interview with ARLnow. 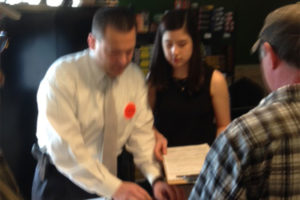 At the grand opening, Pratte stood near the front door, inviting people to check out the store’s inventory. The handguns on display cost anywhere from $249 to $999, while many of the shotguns, rifles and other firearms have much higher price tags. When she wasn’t greeting people at the door, Pratte was working behind the store’s counter answering questions about the shop’s merchandise.

Because she is only 16, Dennis Pratte, Lauren’s father, holds the federal firearms sales license for the store and applied for and signed the store’s certificate of occupancy. In an interview with the Washington Post, Dennis Pratte said NOVA Armory is “a family owned and operated business — and more specifically a female, minority-owned business.” Dennis Pratte’s wife, Yong OK Pratte, is listed on paperwork as an officer for one of Pratte’s previous gun businesses. 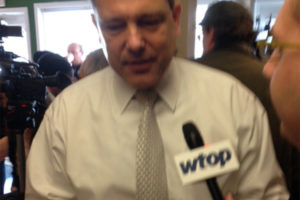 Dennis Pratte told ARLnow that Lauren, a junior in high school, wants to go to law school and eventually become a corporate attorney. “What a better way to learn about business than actually start a business,” Dennis Pratte said at the store’s grand opening. “From day one, she’s filed all the paperwork, and I signed it. That’s what we thought would be a great education for her.”

The gun store, the first in Arlington aside from a pawn shop at the corner of Lee Highway and Kirkwood Road that sells guns, has generated controversy over the past month as nearby residents and local politicians expressed concerns about a gun retailer opening in the neighborhood.

On March 2, state lawmakers who represent Arlington, sent a letter to the landlord who is leasing the space to NOVA Armory expressing their concerns about the gun store. “We strongly encourage you to reconsider your decision to grant a lease to NOVA Armory,” the lawmakers wrote in the letter.

“It’s not appropriate for people, elected officials specifically, to treat legal business owners as they did,” Dennis Pratte said in the interview.

In response to the lawmaker’s letter, Dennis Pratte issued a news release on March 4 that included a prepared statement by Lauren Pratte warning opponents that the store’s team of attorneys is “keeping a watchful eye on local officials and local activists who are trying to harm the business, particularly the relationship between NOVA Armory and its landlord.”

Lauren Pratte, as quoted in the news release, also said the actions of “local crazies” opposed to the opening of the store could find themselves liable for “tortious interference” in a contract between the gun store and the landlord. “If you’ve posted on Facebook, agitated people on the local community’s online forum, made harassing phone calls, or sent angry emails designed to interfere with our business relationship with our landlord, you are on my attorneys’ list,” Lauren Pratte said in the prepared statement. “So if you don’t see NOVA Armory open for business, you better worry about seeing us in court.”

By issuing the news release, Dennis Pratte said he wanted to put everybody who was opposing the store on notice that “there are specific laws that are on the books to prevent people from interfering with contracts between two people.”

Guns have always been a controversial topic in America, with restrictions and regulations of firearms ebbing and flowing over the past 200-plus years. “There has never been a period in American history where gun acquisition, ownership, and carrying have been easier for individuals, overall, than at this very moment,” Jeremy Mayer, an associate professor in the School of Policy, Government, and International Affairs at George Mason University in Arlington, wrote in a recent article.

Daniel Hawes, an attorney for NOVA Armory, said once the gun store signed a lease with the landlord, it became a firm contract. Neither local lawmakers nor residents are “at liberty to pick and choose what kind of retail businesses can open up,” Hawes said. “If it’s a legal business in Virginia, they can’t stop it.”

Hawes, whose law practice focuses on firearms law in Virginia, said he is still monitoring people who might try to shut down the gun store. “I’m still trying to figure out. They’re still working on it. I know that,” he said.

As for local residents protesting the gun store, Hawes said, “Someone who is merely expressing his personal opinion is probably okay.”

“A lot of people made a big fuss their 1st amendment rights. This doesn’t have anything to do with 1st amendment rights. This has to do with people talking to each other for the purpose of shutting down a legitimate business, which is a crime in Virginia and it’s also grounds for a civil suit… The distinction has to be made between interpersonal communications among members of an informal group and people who simply say, ‘I don’t like gun stores.'”

Mark Hand lives in Arlington. He can be found on Twitter at @MarkFHand.