Just the other day, I was pouring a beer just as I had been doing for a couple years — straight down the middle. I was executing a perfect pour — or so I thought. The beer in my glass was flat. Could it have been because of the pour? Was there a more perfect pour, a “goldilocks pour?”

For some, pouring a beer so that it all flows into the glass in one motion without overflowing is perfect. For others, creating a large foamy head is perfect. For still others, finding the balance between a swiftly poured glass and an attractive head of foam is perfect.

Bottled beers tend to have a bit of extra carbonation, which is introduced in the bottling process. That extra gas, if it is not allowed to properly dissipate on pouring, can give the beer an extra bite in the sip that can seem harsh. If we think about what we like so much about draft beer, it just might be that it better balances the carbonation with the underlying beer. Pouring beer from a bottle can be done in a way that approximates the experience of having a freshly pulled draft beer.

For years, I was one of the many who tilted my glass at about 45 degrees (give or take) for a quick and foamless pour. I thought that I was doing it right — and well. I was wrong. I’ll tell you why. Pouring into a tilted glass, to keep the carbon dioxide from escaping quickly, allows it to remain in the beer leaving it more bubbly than it was meant to be. I still have servers in restaurants and family members assuring me that this is the proper pour. I have proof to the contrary.

Randy Mosher, author of the modern classic Tasting Beer, uses wonderful illustrations to show how his idea of a perfect pour is to pour the beer straight down the middle of the glass allowing a large head to form. The idea is to allow this foamy head to form, then dissipate so you can pour more of the beer in the glass. This both generates an attractive head of foam and allows much of the excess carbon dioxide to escape.

Garrett Oliver writes about a similar method in The Oxford Companion to Beer. He writes that a perfect pour involves pouring a thin stream down the middle of a glass as it sits on the table. Oliver’s description applies to restaurant service and assumes that it is proper not to touch the glassware. While he does allow for the server to ask permission to pick up the glass should it become necessary, the perfect pour would be a hands-off affair.

For a couple of years, this has been my preferred method. My experience has been that pouring most craft beers this way results in too much carbon dioxide escaping. Often I am left with more of a syrupy, though tasty, beverage and less of the beer I intended to experience. Let’s go back to that beer I poured that got me thinking. It was meant to be complex with banana-like esters and bitterness from black malt and alcohol sweetness. All I got was a cloying and overly smooth brew that seemed an incomplete picture.

It got me thinking about what I call the “goldilocks pour.” My Cicerone Certified Beer Server training recommended a hybrid pour, similar to the technique used when pulling a draft beer, for restaurant service. The idea was that a straight pour would take too much time, leaving a customer waiting. The solution was to pour into a 45 degree-tilted glass for two-thirds of the bottle then rotate to pour the remaining third and create a modest head of foam. Perhaps the amount of carbonation that Randy Mosher wanted to release was not so great as to stand up to the straight pour method. Maybe we need to retain some of that fizz.

I got a recent seasonal release from New York’s Brewery Ommegang to use for my pour test. It’s a saison made with sweet orange peel and pink peppercorn. The result is a mildly fruity beer that brims with the banana-like esters of Belgian yeast, but is balanced by the mild spice of pepper and bright citrus of the peel. It’s quite refreshing and deserving of a perfect pour. It’s important to note that beers that use Belgian yeast, like saisons, are highly carbonated to begin with. 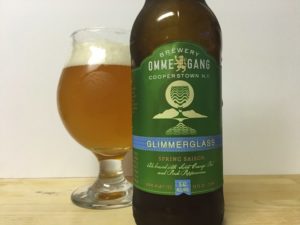 45 degree pour: There’s so much carbonation in saisons that even this method cannot contain the foamy head. The amount that you’d normally want to see on most other beers forms without even trying. However, the result is a mouth feel that is excessively carbonated. It was uncomfortable to swallow, making me flinch a bit. This style, in particular, needs to have the carbon dioxide release more than this pouring method will allow.

The straight pour: I timed this one. There is a reason that the Cicerone Certification Program doesn’t recommend this method: it can take entirely too long for a customer to reasonably wait. It took fully five minutes just to pour the beer from the bottle into the glass. I still had to wait beyond that for the foamy head to dissipate. The result here is, not just a matter of time, the extreme carbonation mentioned above is gone. The constantly forming and receding foamy head gave the carbon dioxide somewhere to go. The problem here is that the expected vibrant mouthfeel is now absent. It’s immensely drinkable, but also slightly off.

The goldilocks pour: As I mentioned above, this pour involves tilting the glass for a two-thirds of the pour then rotating back to 90 degrees to allow a modest head of foam to form. What do you know? I’m getting a nice effervescence that tickles my tongue without being off-putting. The flavors come through brightly. Drinkability has not really diminished despite retaining more of the carbon dioxide.

What’s your preferred pour and, more importantly, what are you pouring these days? Cheers!