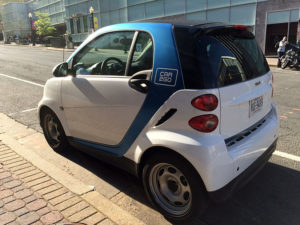 The Arlington County Board this weekend is set to consider a big change to Car2Go car sharing service in the county.

Car2Go launched in Arlington this past fall as a pilot program, but it only allows trips that start and end in Arlington. The Board is considering taking a first step to allowing cross-jurisdictional service between D.C. and Arlington.

After launching Oct. 22, Car2Go got off to slow start with customers, according to a county staff report. In response, Car2Go reduced its Arlington fleet from 95 cars to only 25 in January.

So far, 2,000 Arlington residents have joined as members, taking 6,600 trips, but the fleet reduction has resulted in “less availability overall and reduced usefulness to members,” said county staff.

The company has also had to contend with complaints about their cars being parked in one place for too long. In residential permit parking areas, the maximum idle time is 24 hours; it’s 36 hours everywhere else.

“Membership and vehicle use in the first couple months of the program was lower than anticipated and several complaints were received from residents reporting car2go vehicles that were idle/parked for longer-than-permitted durations,” said the staff report. “All of these relocation requests were resolved by car2go staff.”

With only 25 vehicles — up to 200 were authorized by the county — “the pilot does not indicate that an Arlington-only system is viable,” say county staff.

By allowing Car2Go to operate across state lines, it can “provide a more useful service to members in Arlington and D.C.,” “operate a fleet size sufficient for proper evaluation
of operational viability in Arlington” and “reduce vehicle idle times and rebalancing costs that have been a barrier thus far.”

Even though county staff says their D.C. counterparts support cross-jurisdictional service, approval by the County Board this weekend would not result in an immediate service change, Car2Go said.

“Approval from the Arlington County Board would be a very positive step toward cross-jurisdictional access, and we’re also working to gain support from DDOT,” said spokesman Brad Ducey. “As soon as we are able to get support from both jurisdictions, we would be able to implement quickly.”

“It has always been our goal to create a seamless regional carsharing solution, similar to what members of Capital Bikeshare experience,” Ducey added. “We know car2go members are eager for access between Washington D.C. and Arlington, and we’re continuing to work hard to make that a reality. We’ll be sure to keep our members informed since we know car2go is an important part of how they get around, and cross-jurisdictional access would make it even more convenient.”