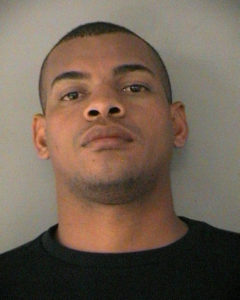 Atlanta Braves outfielder Hector Olivera has been arrested and charged with assault and battery after a dispute with a woman at the team hotel in Pentagon City allegedly became physical.

The incident happened just before 7 a.m. today at the Ritz-Carlton at 1250 S. Hayes Street, next to Pentagon City mall.

Police say they were called to the hotel for a report of a woman having a dispute with a man. After they arrived officers found a woman with visible bruises, according to Arlington County Police spokeswoman Ashley Savage.

The woman was transported to Virginia Hospital Center for evaluation. Olivera, who is in town with the team for a series against the Washington Nationals, was taken into custody.

Late this afternoon Olivera went before an Arlington magistrate and was charged with assault and battery. His bond was set at $10,000.

Here’s the statement from ACPD:

On April 13, 2016, at approximately 6:51 a.m., police responded to a dispute at the Ritz Carlton located in 1200 block of S. Hayes Street. A female victim alleged that a male suspect assaulted her. The female victim had visible bruising and was transported to Virginia Hospital Center with non-life threatening injuries. The male suspect remained on scene and was taken into custody. Hector Olivera, 31, of Miami, FL, was charged with assault and battery and bond was set at $10,000.