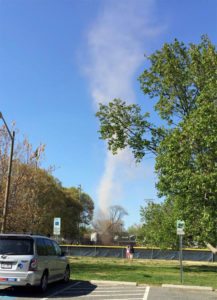 A witness said the whirlwind sent spectators and players scurrying for cover.

“Three twisters made their way down the third baseball line during a 13-year old Senior Babe Ruth baseball game,” said Harold Andersen. “At first it appeared to be a strong gust of wind but as lawn chairs and full bat bags were carried up into the sky… players, coaches and umpires went running to the dugouts.”

The dust devils eventually dissipated over the library, said Andersen. But seriously, we asked — did one really lift bat bags into the air?

“I actually had a lawn chair lifted out of my hands as I was protecting my face from the flying sand,” Andersen said. “I would swear at least two bat bags loaded with catcher’s gear flew into and over the backstop.”

He added: “One parent yelled out ‘we are not in Kansas any more.'”