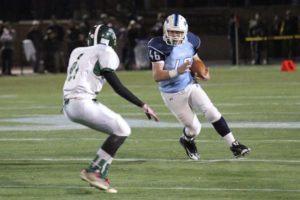 Yorktown High School is getting new synthetic turf for its stadium at Greenbrier Park.

The Arlington County Board on Saturday voted 5-0 to approve a $674,000 contract with Fieldturf USA for the project, which is described as a “total makeover” of the field, which is “worn beyond reasonable repair.”

The Greenbrier Park field is used for school events and sports like football, soccer, lacrosse and field hockey, in addition to use by the community. Arlington Public Schools will pay half of the field replacement cost.

“Improvements to the Greenbrier Park/Yorktown High School field will consist of replacement of the synthetic turf surfacing, inlaid game field markings (including mid-field logo and end zone lettering), replacement of corner flags, combination football/soccer goals, and discus cage, as well as necessary repairs to the field base,” notes the project website.

The new turf will utilize an alternative infill, EPDM (Ethylene Propylene Diene Monomer), instead of crumb rubber from recycled tires. Some have raised concerns about a possible cancer risk from crumb rubber, though in a press release the county said the decision to use EPDM was about athlete safety and turf durability.

“The product is softer than crumb rubber and is less abrasive on turf fibers than rubber,” notes the county. A shock-absorbing pad is also being installed under the turf, to improve safety and reduce concussions among youth athletes.

Construction is expected to take place during the summer, wrapping up in time for the new school year. The total project cost, including design and project management, is pegged at $1.6 million.

The full press release about the project, after the jump.

The Arlington County Board today approved a $674,000 contract to renovate the synthetic turf field at Greenbrier Park. The field is the home stadium for Yorktown High School, and is used for school events as well as football, soccer, lacrosse, field hockey and other sports.

“Our active community and its growing number of youth sports teams need well-maintained, safe athletic fields,” said Arlington County Board Chair Libby Garvey. “We’re pleased to be partnering with Arlington Public Schools to replace Greenbrier Park’s heavily used field with new turf using improved materials and padding that will benefit all who use it.”

The Board voted 5 to 0 to award the contract to Fieldturf USA Inc., the lowest responsible bidder.

For nearly a decade, the existing field has been heavily used for scholastic events, sports leagues, scheduled games and drop-in play. The turf is now worn beyond reasonable repair. The project includes replacing the synthetic turf surfacing, infill and inlaid game field markings, as well as corner flags and the combination football/soccer goals. The field base and the existing aggregate layer and drainage system also will be repaired.

Arlington Public Schools will pay 50 percent of the cost of replacing the field and will fund a mid-field logo, end zone lettering and a new discus cage. Construction is anticipated to begin in early June 2016 and be completed in August 2016.

The industry standard for synthetic field infill material has been a mixture of crumb rubber and silica sand. Most crumb rubber is manufactured from recycled tires. It has been tested by several federal, state and independent agencies and found to be safe and durable. Even so, Arlington County continues to look for new ways to enhance the safety and sports performance of its fields.

Earlier this year, Arlington introduced an alternative infill, EPDM (Ethylene Propylene Diene Monomer), to its lineup of synthetic turf fields. EPDM is a vulcanized rubber material that resembles and plays like crumb rubber, but is not made from recycled materials. The product is softer than crumb rubber and is less abrasive on turf fibers than rubber. Greenbrier’s replacement infill will consist of EPDM and silica sand. The same EPDM infill was recently used for the new synthetic turf fields at Williamsburg Middle School.

In its continued efforts to eliminate waste and be responsible stewards of the environment, Arlington County requires old synthetic turf and infill be recycled when they are replaced. At least 90 percent of the turf materials must be diverted from landfills or incineration and sent back to the manufacturing process. This requirement keeps as much as 18 construction dumpster loads of material from a typical field replacement from entering landfills.

Project cost and funding
The overall project budget is $1.625 million, which includes design, survey, construction and project management. Funding is available from the FY 2016 Pay-As-You-Go Parks maintenance capital funds. A Memorandum of Agreement between Arlington County and Arlington Public Schools confirming the intent to share in the cost of the renovation and the County’s management of the project will be executed by the County Manager and Superintendent of Schools.

To read the staff report on this project, visit the County website. Scroll down to Item #34 on the Regular Agenda for the April 19, 2016 Board Meeting.