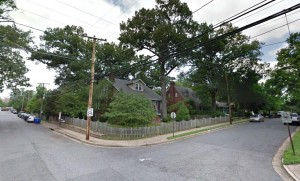 Eleven homes on the 900 block of N. Daniel and Danville streets are connected to a failing sewer line that runs through their backyards. The line is believed to date back to the 1920s, when the first of the homes in the neighborhood were built.

As we reported in 2013, county workers had been clearing occasional blockages of the line, until the county determined that it did not actually own the line — it was privately constructed and the county had “no rights to operate or maintain this line.”

Facing steep plumbing and excavation costs for connecting to a public sewer line, homeowners threatened legal action. On Tuesday, the County Board settled the matter by voting unanimously to approve a compromise agreement with the homeowners.

Arlington will roughly split the cost of connecting all 11 homes — $253,980 plus a $50,000 contingency — and will advance the other half of the money to seven homeowners who asked for help financing the work. The seven homeowners will repay their share over seven years, at 2 percent interest, via the establishment of a “service district” that will levy a frontage assessment on their property.

Arlington County said the compromise was necessary because the private sewer line was failing and beyond repair, and a major sewage backup in the midst of a protracted legal dispute could have resulted in a significant public health hazard.

” The amount of time required to resolve the disagreement would delay the time when remedial action could be taken, thereby threatening the likelihood of a public health emergency, and would result in costly litigation for all involved,” notes the staff report. “In an effort to prevent further delay, the County and the property owners negotiated an agreement that would promptly address the looming public health concern.”