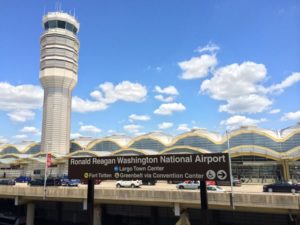 From 9 a.m. to noon, emergency responders will swarm “a remote area of the airfield” as part of a a simulated aircraft accident. The exercise will include a period of fire and smoke, 120 volunteer “victims,” multiple support helicopters and a river rescue response.

Nearby residents can expect to hear and/or see the exercise in progress.

“The full-scale emergency preparedness exercise, which is the culmination of months of planning and coordination across multiple jurisdictions and disciplines, is part of Federal Aviation Administration-mandated safety training to ensure airports are prepared for real-life aircraft emergencies,” notes a press release. “Airports are required to conduct a full-scale exercise every three years in order to be certified by the FAA.”

The rest of the press release is below.

Ronald Reagan Washington National Airport will hold an emergency preparedness exercise on Saturday, April 30, from 9 a.m. to approximately 12 p.m. A simulated aircraft accident will give the airport’s first responders an opportunity to put their emergency plans into action while providing hands-on training to airport and airline staff, hospitals, local jurisdictions and other emergency personnel. During the exercise, emergency personnel will respond as in a real emergency, including the use of sirens, firefighting equipment and helicopters.

The exercise will be held in a remote area of the airfield and will not affect normal airport operations or flights. Although the site will not be visible to most passengers, reminders about the exercise will be announced on Saturday morning via flyreagan.com, @Reagan_Airport on Twitter and public address systems in the airport.

Specifics of the exercise scenario have not been shared in advance with responding participants. The exercise will include the following elements to add realism to the simulated emergency:

PLEASE NOTE: Some of the exercise elements may be seen or heard on Saturday morning from areas surrounding the airport – especially in Arlington and Alexandria near U.S. Route 1, George Washington Memorial Parkway, I-395 and along the Potomac River near the airport.