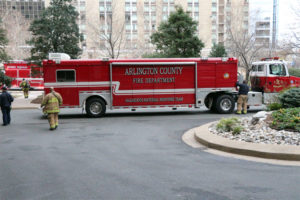 An Arlington County Fire Department hazmat team has been called to a Chinese restaurant in Falls Church for a report of an “unusual odor in the bathroom,” according to scanner traffic.

The incident was reported just after 11:30 a.m. at the Happy Family restaurant at 301 S. Washington Street.

Initial reports suggest that the odor is the result of pipe relining in the area.