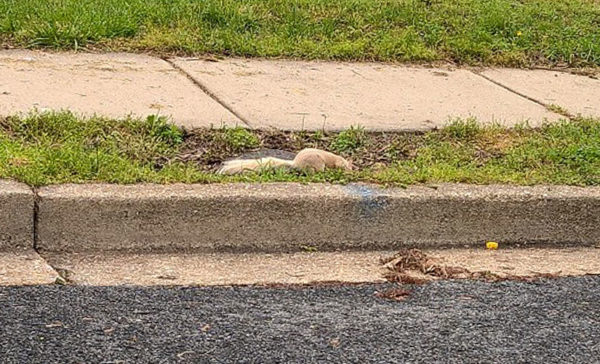 A rare white or albino squirrel was spotted near Columbia Pike this week.

Reader Joan O’Keefe sent along the above photo, showing the squirrel from a distance on 12th Street S. near S. Cleveland Street, in the Columbia Heights neighborhood, two blocks from Columbia Pike.

“The mailman said there’s a big family of them somewhere on 16th S.,” O’Keefe said. “Too bad it is a dark, drizzly day so the photo really doesn’t show its true white coloring, but you can get an idea by comparing the squirrel to the yellow in the grass. I don’t know if these are common in Arlington, but I have lived here since 1979 and I never saw another white squirrel. Solid black squirrels, yes, but white, possibly albino, never.”

“We have had a couple reports this year about the white squirrels. White squirrels, and specially albinos are very unusual,” he said.

“Black squirrels are fairly common due to the introduction of 18 black squirrels from a Canadian colony at the National Zoo during Teddy Roosevelt’s presidency, not so much white ones,” Abugattas explained. “White squirrels are much rarer since their coat color makes them stand out and become easier prey… Albinos with their pink eyes, because their eye sight is also compromised, are even rarer.

I’ve only seen a couple of white squirrels in my life personally. So they’re rare in our area and all over for sure, but not unheard of. With few predators and maybe some help from folks feeding it, it looks like it will make it fine and be something the neighborhood may find a neat backyard critter.

I’m not sure about a colony of them (yet anyways), we’ve certainly had white squirrels reported to us. It is possible that that recessive gene, since there are no real predator pressures, could be carried on like the black genes were and we end up with a local colony someday like the ones previously mentioned.

The past, present, and future of Columbia Pike is rather easy to see.