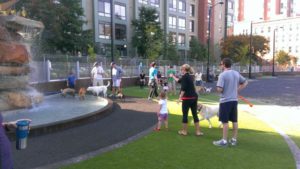 Doggone it, we messed up.

That’s what Arlington County is telling dogs and their owners who got stuck inside the James Hunter Community Canine Area (1299 N. Herndon Street) in Clarendon Friday evening.

A faulty latch is being blamed for the stuck gate that prevented dog park users from leaving. The fire department responded and removed the latch, allowing people and their pets to head home. A welder was scheduled to work on the gate today.

Arlington County issued a light-hearted press release about the incident today (see below), with the title, “Ruff Night Ends in Tails of Joy: We now know who let the dogs out.”

The Arlington County Fire Department came to the rescue of some two dozen pups plus their people last Friday after an inner gate froze closed around dinner time at Clarendon’s James Hunter Park’s dog park.

No one was howling to leave, but once firefighters removed the stubborn, industrial-grade latch, almost half the pooches and their biped pals hightailed it home, authorities reported.

“We want to apologize to the dogs and their owners,” said Jane Rudolph, director of the County Department of Parks and Recreation. “That gate had a date with the welder today.”

Park locks and latches are checked regularly and lubricated and adjusted as needed.

All eight of Arlington’s dog parks are open from sunrise until a half-hour after sunset unless otherwise designated.