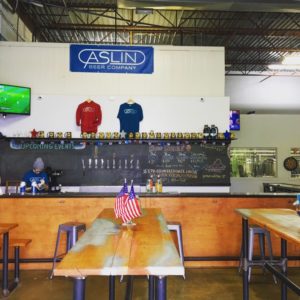 It felt like the 40th day of rain and I was setting out to visit Aslin Beer Company in Herndon. I got a text saying that they were about to go down to one beer on tap from two. Maybe I should reschedule. With the rain and the prospect of only getting to review one beer — maybe none if there was a rush — I almost changed my plans. Readers, I did not and I’m so glad I didn’t.

Aslin is a nano-brewery located off the Dulles Toll Road in Herndon in the back of a pseudo-industrial park full of catering and delivery restaurants. Their space is tiny, accommodating several picnic and tall tables. Their decent-sized bar also has stools. Clearly visible is the brewery, with its gleaming equipment, which is in use nearly every other day. Their beer is not packaged, but rather kegged for serving in the brewery, growler fills and distribution.

On this rainy Sunday, it was a bright and dry refuge and — by a stroke of good fortune — had not one but three beers on tap. Of course, one of those beers, Stellar Parallax, was being held for a Wednesday release. I found co-founder Richard chatting warmly with customers who had stopped for a glass of beer and some crowlers, 32 oz. growlers that are really large aluminum cans that get sealed by a special machine while you wait.

What I learned from Richard is that he, Andrew and Kai — Aslin’s founders — had been craft beer travelers prior to settling down to make their own beer. Their travels frequently took them north to New England where they visited the likes of Tree House Brewing Company and Trillium Brewing. Not surprisingly they were also avid home brewers. It didn’t take long before they decided that what they really wanted was the same great beer, which includes the recent trend of hazy New England-style IPAs, in their own back yard. They also decided that they were the men for the job. 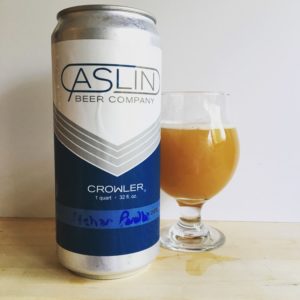 Eight months ago, Aslin Beer Company opened its doors to the public. Since then, they’ve managed to gain a loyal customer base that is on it’s way to generating the kind of buzz that is usually seen with the aforementioned Tree House. Crowlers with the Aslin label are making their way out of the DMV as craft beer aficionados recognize the quality and want to share it with friends.

All that is to say that, after only 8 months in business, they are reaching for the stars. There is even talk of an expansion that would add a second, larger brewing facility to allow Aslin to produce more delicious beer. The great news is that you don’t even have to go to Herndon to find their beers, because Dominion Wine and Beer will be serving and growler-filling their beers, too. Today, Dominion will tap both A Small Town in Ontario IPA and Stellar Parallax Double IPA at 5:00 p.m. Don’t miss the tasting that will accompany this launch.

I’m starting with the lightest of the beers that I sampled. This Belgian-style wheat beer is a style that I often overlook. I find them less interesting than other styles. I have to tell you, though, this one does not disappoint. Putting my nose in the glass rewarded me with banana from the yeast and bread dough from the wheat-balanced grain bill. The flavor is totally sweet banana with a light soda cracker accompaniment. My crowler poured very smooth, which means that this Belgian-style lacks the typical effervescence found in similar beers. I’m OK with that, though, as the smooth mouthfeel enhances the experience. This is a truly delicious and light bodied beer.

Rated 58th among new beers and 15th among Virginia beers on BeerAdvocate.com, this IPA was a complete delight! It’s light enough to not overwhelm while being full of big flavor. Small Town and the Stellar Parallax Double IPA fit into the newly trendy category of New England-style IPAs, also affectionately called “juice bombs” — cloudy or hazy beers that are marked by their opaqueness and their velvety mouthfeel. Often made with a combination of English Ale and American Ale yeast that doesn’t create clumps, the beers’ haze comes from suspended yeast bonding with oils from hops added late in the brewing process. Another typical result is that these beers take full advantage of the fruity flavors imparted by the hops without retaining any of the bitterness. This beer is a grapefruit juice bomb. From the aroma all the way through the finish, that bitter fruit dominates the palate. Joining this big citrus burst toward the end of the sip is a winey sweetness that curbs the bitterness and makes for a delicious beer. I have to be honest, I sipped one of these while talking to Richard at the brewery and it was all I could do not to geek out. There’s a reason this beer is ranked so high locally and nationally, it’s a delicious.

Rated 49th among new beers and 18th among Virginia beers by BeerAdvocate.com, Stellar Parallax is another stellar New England-style juice bomb. I got a crowler full before Aslin was ready to launch so that I’d have it ready to review for this article. I didn’t open it until Wednesday, launch day, but it was hard to wait. After enjoying it’s lighter cousin above, I knew I was in store for another special beer. I was not disappointed. Instead of grapefruit, Stellar Parallax brings the sweeter citrus — mandarin orange and tangerine — and tropical passion fruit with a pine twist for a complex and dank double IPA. At 8.1%, this is a relatively strong IPA, but it is so smooth that it goes down like a brunch cocktail. Enjoy a glass or two as you cool off in the shade of your patio umbrella with the sounds of the start of summer all around you. If this big, delicious IPA is gone by the time you get to the store or the brewery, never fear because Aslin will work their way back to it in time.

A final note, Richard tells me that Aslin makes 10 IPAs, for now, which means that all but one is rated by Beer Advocate. I’m impressed. However, IPAs are not all they make. Of course, I mentioned a Belgian-style wheat, but they are also getting recognized locally for their take on flavored stouts. Readers, I haven’t tried them, but I might be first in line when the next one launches. Have you been to Aslin Beer Company yet? Tell me what you thought below.

Today, Dominion will tap both A Small Town in Ontario IPA and Stellar Parallax Double IPA at 5:00 p.m. Don’t miss the tasting that will accompany this launch.