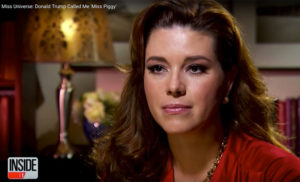 Former Miss Universe Alicia Machado and former Arlington County Board member Walter Tejada will be among those speaking at an Arlington press conference on “Donald Trump’s Year of Hate” tomorrow.

The press conference is being held at 1 p.m. Wednesday at Atlacatl Restaurant (4701 Columbia Pike).

Machado, who won the pageant in 1996 as a contestant from Venezuela, became a U.S. citizen in May, prompting a congratulatory tweet from Democratic presidential candidate Hillary Clinton.

Machado is an avowed opponent of Trump, the presumptive Republican presidential nominee, accusing him calling her “Miss Piggy” after she gained 50 pounds within months of winning the crown.

The press conference is being organized by advocacy groups People For the American Way and CASA in Virginia. From a press advisory:

Since June 16th of last year, when he infamously described Mexican immigrants as “rapists” at his campaign launch, Trump has only increased his attacks against immigrants and Latinos. Starting on Thursday, new Spanish-language ads from PFAW will run for four weeks, highlighting Donald Trump’s campaign of hate thus far.

The press conference on Wednesday, co-hosted by CASA in Action (Virginia), will include more details on the ad launch. At the event, Alicia Machado, former Miss Universe winner, will share her story about why she’s becoming a citizen to vote against Donald Trump. She will discuss her personal interactions with Donald Trump, including how he derogatorily referred to her as “Miss Housekeeping” and “Miss Piggy.” Dolores Huerta, civil rights leader who co-founded the United Farm Workers with Cesar Chavez, is president of the Dolores Huerta Foundation, and is a board member of PFAW, will discuss the importance of the Latino vote and speak out against the hate Donald Trump has displayed over the last year. Virginia leader and former elected official J. Walter Tejada will focus on the Latino vote in Virginia, and leaders from PFAW and CASA in Action will speak about their stand against Trump’s bigotry.