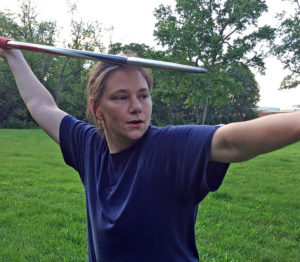 So she picked up the javelin, of all things, and now the career firefighter who turns 40 on Friday is standing out, in more ways than one.

“It’s not every day you see a firefighter with javelin in hand,” Ingles acknowledged.

A captain with the Montgomery County Fire and Rescue Service, currently serving as Metro’s fire department liaison, Ingles has been preparing for the U.S. Police & Fire Championships to be held June 18-25 in San Diego.

She aims to win.

Ingles has successfully hefted other events, as well, including the hammer throw, shot put and various weight throws. Along the way, she’s lost weight, won medals and made herself over, several decades after competing on the Yorktown High School track and field team.

“This has been a tough road, being an adult learner,” Ingles said. “I will sometimes get discouraged because I am not throwing as far as I think I should. My coach has to remind me javelin takes years of practice to learn and master.”

Ingles started from scratch, as must others. Only 18 states currently allow javelin at the high school level, and Virginia is not among them. The fear of spears dropping down like errant drone strikes also complicated Ingles’ search for an Arlington practice field.

“‘You can’t be throwing that around here,'” Ingles said, recounting the typical response from various authorities.

For the sake of perspective, the qualifying distance for women’s javelin at this year’s U.S. Olympic Team try-outs is 54 meters. So far, Ingles’ personal best is about 18 meters. On the other hand, javelin is not strictly the prerogative of youth. Last year, a Long Beach, California police detective in her late 40s out-threw all other women competitors at the U.S. Police & Fire Championships.

“Penny is very competitive, oh my goodness,” said Colina, an Arlington resident who set a school javelin record at Keene State College in New Hampshire. “She’s someone who has high goals. Whether she has a 12, 15 or 18-hour shift, she’ll still come back and train.”

On a recent weeknight, Ingles arrived for her weekly session at Chinquapin Park next to T.C. Williams High School. Earlier that day, she had juggled myriad emergencies. A Metro worker had collapsed near the East Falls Church station. A wheelchair-bound person had fallen onto the train tracks. A few insignificant fires needed extinguishing.

After changing into her workout clothes, Ingles conferred with Colina. She is recovering from a foot injury, so must account for that. After some warmups, she laced her high-top spiked shoes and took up her javelin: A seven-foot, four-inch domesticated weapon that weighs 600 grams and places unusual demands.

Throws, Corina explained, should be launched at a 37-degree angle, with adjustments for wind conditions. He reminded Ingles to keep the javelin “glued to the temple” as she prepared to toss. The run-up and launch itself is an exercise in controlled aggression, a test of core strength and flexibility. Injuries are but one quick twist away.

“The javelin throw in particular is such a violent motion, when you generate speed and then almost have to come to a sudden stop, and use your hips to drive forward again,” Colina noted.

Together, while the sun settled, Ingles and Colina advanced up and down the Chinquapin Park field: The firefighter throwing, the coach guiding, both perfecting their atypical craft.

“I like the fact that I compete with other people who are older than I,” Ingles said, “just really special older people who have the drive to do their best, not necessarily to win.”

Michael Doyle is a reporter in the Washington bureau of McClatchy newspapers. Follow him at @MichaelDoyle10.