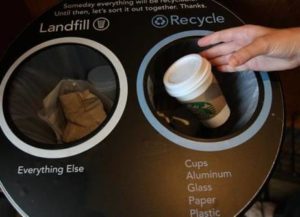 Students at Yorktown High School have released a petition seeking integrated recycling bins for the school’s hallways and classrooms.

Right now, the school uses a system of regular trash cans and blue recycling bins to sort its garbage.

“One would think that we already have an effective system as there are blue recycling bins in every single classroom,” said the petition. “However, these recycling bins are just treated as normal trash cans by a majority of students. This eliminates the whole purpose of the recycling bins and teaches students that the environment is not that important and can be overlooked or put aside.”

The new integrated recycling bins would streamline the recycling process into one large bin. One side is marked for recyclables such as paper, glass and plastic. The other side is labeled for landfill trash.

The petition has a goal of 1,000 signatures. As of Tuesday afternoon, it had received just over 150 signatures.

END_OF_DOCUMENT_TOKEN_TO_BE_REPLACED

More Stories
Arlington Agenda: June 21-26Arlington Ranked No. 7 Suburb in U.S. By Same Website That Just Ranked It No. 1 City