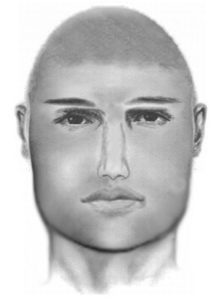 Arlington County Police have released a composite sketch of a man who broke into a woman’s apartment and sexually assaulted her.

The crime happened early Sunday morning near Ballston and was first reported earlier this week.

Police are seeking the public’s help in identifying the suspect. They have released a composite sketch (left), in the hopes that it may lead to more tips.

The Arlington County Police Department’s Special Victim’s Unit is asking for the public’s assistance in identifying and locating a suspect involved in the sexual assault of a female victim which occurred at a residence in the 3900 block of 4th Street N. in the early morning hours of June 19, 2016.

At approximately 2:00 a.m., an unknown male subject unlawfully entered a female victim’s apartment and sexually assaulted her while using the threat of a weapon to hold her against her will. During the attack, the 28 year old female victim was able to lock herself in the bathroom and yell for help. The male suspect fled the scene on foot.

The suspect is described as a white Hispanic male, 25-35 years old with dark hair and a fair complexion. He was wearing a gray hooded sweatshirt with dark pants. Following interviews with the victim and witnesses, a composite sketch of the suspect was developed.

Arlington County Police detectives are actively investigating this incident. Responding officers attempted a canine track in the area with negative results and officers canvassed the area speaking with possible witnesses. Officers will continue conducting extra checks in the area.