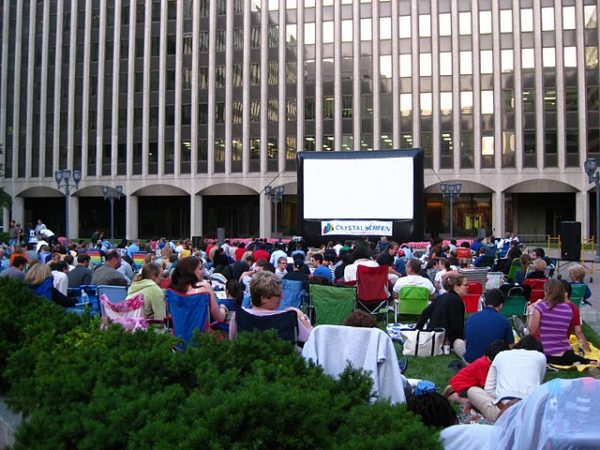 (Updated at 4 p.m.) Candy and booze are set to star in Crystal City’s al fresco film series later this year.

The Crystal City Business Improvement District’s “Sweets and Sips” flicks for Crystal Screen in September are slated to include four movies that feature chocolate and wine. Initially, the organization planned to screen Star Wars movies this summer, but were unable to show them.

“Despite earlier confirmations with the movie licensing company, rights to publicly show the Star Wars movies for the Crystal Screen outdoor movie festival were lost due to an unexpected move from the DARK SIDE!” a Crystal City BID email says. “So, we’re celebrating by drowning our sorrows in the comfort of sweets and sips.”

The email adds: “Bring a picnic or take-out from area restaurants and enjoy sips from the pop-up wine bar (cash) with hand-selected offerings from the Crystal City Wine Shop and tasty sweet samples from Crystal City‘s Schakolad.”

Movies are scheduled to start about 30 minutes after sunset outside 1901 S. Bell Street.