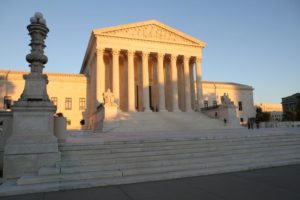 Arlington’s elected officials are speaking out in favor of today’s U.S. Supreme Court ruling on abortion.

Beyer called the decision a victory for “common sense and justice for women” in a statement:

Common sense and justice for women and families prevailed at the Supreme Court today. This decision once again affirms our nation’s longstanding policy that women have the right to an abortion until viability, and that efforts by anti-choice forces to deny that right through lack of access imposes an undue burden. Anti-choice forces in Virginia apply the same tactics, and have also failed.  We will continue every effort to maintain and expand women’s healthcare access in Virginia.

Thank you, SCOTUS! W/o access, there is no right to choose. "Each [restriction] violates the Federal Constitution.” https://t.co/0qCj9aBS1t

Today the Supreme Court sent a clear message that all women have the right to make their own reproductive health decisions, no matter where they live. This is a victory for women’s health in Texas, in Virginia, and across the country.

I applaud the Supreme Court for seeing the Texas law for what it is – an attempt to effectively ban abortion and undermine a woman’s right to make her own health care choices. This ruling is a major win for women and families across the country, as well as the fight to expand reproductive freedom for all.

The Texas law is quite similar to arbitrary and unnecessary rules that were imposed on Virginia women after I left office as Governor. I’m proud that we were able to successfully fight off such “TRAP” regulations during my time in state office. I have always believed these sort of rules are an unwarranted effort to deprive women of their constitutionally protected right to terminate a pregnancy.