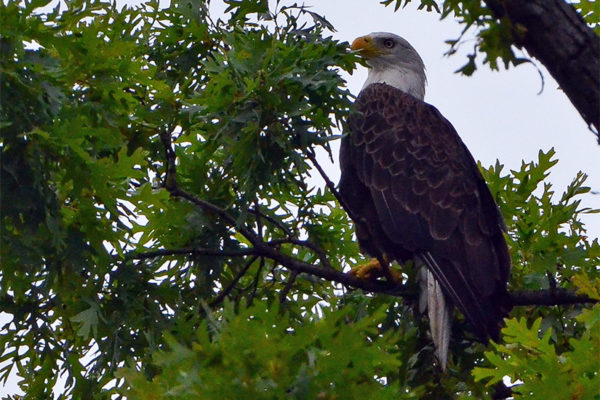 Bald Eagle Spotted on Fourth of July — A bald eagle was spotted in the area of N. Park Drive, in the Arlington Forest neighborhood, yesterday on the Fourth of July (see above). The eagle “finally flew away after half an hour of harassment from a bunch of crows,” noted a neighborhood listserv email, but not before delighting adults and children in the neighborhood who gathered to see the patriotic sight.

Vietnam Vet Survives Stroke Thanks to Medics — Quick-acting Arlington County paramedics, a Good Samaritan who helped direct traffic at an intersection to let the ambulance through and skilled emergency room doctors helped to save the life of a Vietnam veteran who suffered a stroke while visiting his son in Arlington. [Fox 5]

School Board Chair Focused on Achievement — The Arlington School Board’s new chairman, Nancy Van Doren, says her focus is on individual student achievement, even in the midst of ongoing school growth and capacity challenges. “Our litmus test must be: Does each and every child receive the support he or she needs?” Van Doren said. [InsideNova]

Faked Fireworks Included Arlington Angle — The internet is abuzz about PBS’ use of “rerun” fireworks footage intermixed with live footage during its Capitol Fourth broadcast last night. One of the camera angles used showed an impossibly clear view of the fireworks and of the Capitol building from Arlington. In actuality, rain and low clouds made for a dreary, hazy view of the fireworks display. [WTOP]