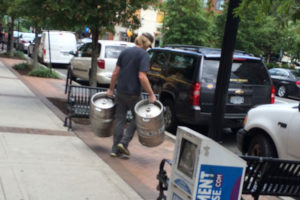 For a shortened holiday week, there sure has been plenty of bad news. It’s enough to make someone look forward to a relaxing weekend with friends, family and cold beer.

In Arlington, a little girl suffered very serious injuries in a crash that remains under police investigation.

Nationally, the ongoing presidential election circus didn’t inspire much confidence in the next occupant of 1600 Pennsylvania Avenue, although it did at least bring affable actor Tony Goldwyn to Clarendon.

And of course, the series of shootings involving police, culminating of last night’s rampage in Dallas, has broken hearts in Arlington and around the country.

Times like these remind us of the darker side of humanity — but should inspire us to counter that with kindness and respect for our fellow humans. Here in our little 25.98 square mile Arlington bubble, we hope that that extends to our comment section.

The comments have taken a bit of a turn in the wrong as of late, which isn’t exactly surprising given what has been in the news. Nonetheless, we’re taking action to keep discussions productive and out of the gutter.

Those who repeatedly troll with political topics on non-political news articles (think: bringing up immigration on an article just because the subject has a Hispanic last name); repeatedly try to get around moderation when it occurs or harass our staff about it; or have no history of commenting on the site and begin by generally being a jerk — you will be banned. Basically that’s the golden rule: don’t be a jerk. Those who post thoughtful comments, who add to the discussion, who make an effort to be part of the community, who can post opposing opinions without going nuclear — you are welcome here.

We know that there are plenty more of the latter than the former here, thus if you are banned you can save yourself some time and skip sending the angry email explaining how we’re going to regret no longer having you as a reader/commenter/etc.

With that, we hope you have a nice weekend. Feel free to discuss any topic of interest in the comments.