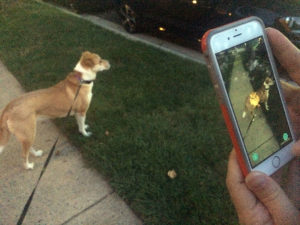 If you have no idea what the headline of this article means, you’re not alone but you’re part of a rapidly dwindling group.

Late last week and into the weekend, the smartphone-based game Pokemon Go exploded in popularity and has become a pop culture phenomenon. That’s especially remarkable if you consider that the game was only officially released on Wednesday.

Walk around any given Arlington neighborhood last night and you were likely to see people loitering about, glued to their phone — more so than usual, at least. The game takes place on local streets and gathering places across the world, in augmented reality.

Pokemon creatures may appear on the sidewalk in front of you. A park or a community center may be a Pokemon gym (there’s even a Pokemon gym inside the Pentagon). A local business may make a payment in the game to attract Pokemon — and thus attract Pokemon-playing potential customers.

Given the game’s popularity, we were interested in knowing which team local players were joining. Let us know in the poll below.