After a long, cool Spring we jumped right into hot Summer with a heat wave. Inspired by the perennial search for the one song that defines a summer, I began to think about my beers of the summer. When I’d find one that hits all the right notes and epitomizes the perfect beer of summer, I’d post it on Instagram and tag it with the hash tag #BeersOfSummer. But it couldn’t be just one beer, after all there are nearly 4,300 breweries operating in the U.S. as of a 2015 count by the Brewers Association. These are my #BeersOfSummer.

I picked five beers that I haven’t already talked about and one that I have. Let’s look at the first five beers. 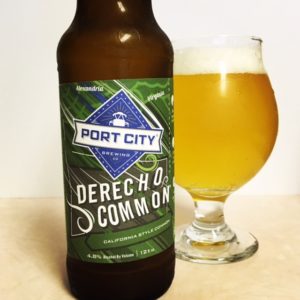 In the Summer of 2012, our whole area was hit by a derecho — a storm marked by straight-line winds as strong as some tornadoes. I lost power for several days, along with about a million other DC-area residents. What happens, though, when a business — a brewery — loses power? Alexandria’s Port City lost power for a full five days right when they were brewing a lager. Lagers need colder temps than the powerless brewery could provide, so the beer transformed from lager to common beer. The California-style common beer (also called a steam beer) was a lager that was brewed at a higher-than-normal temperature and air-cooled in the open air. Derecho is a hop-forward example that is lightly bitter and slightly fruity. Balanced with a soda cracker malt that is unobtrusive, Derecho is a supremely quaffable brew. Enjoy this summer seasonal beer ice cold anywhere there is sun — or the occasional storm. 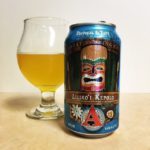 Boulder, Colorado’s Avery Brewing joined the ranks of sour beer with a nominally Belgian take on the tart Berliner Weisse. Ripe passion fruit flesh join a hint of banana and clove in an aroma that accurately foreshadows the flavor to come. From the beginning of the sip, Liliko’i is both tart and sweet. This effervescent ale never goes entirely sour, but balances the pucker with a light sweetness. It’s super refreshing — Summer in a can. 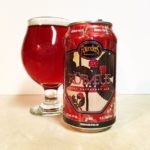 Brewed year-round, Rubaeus is Founders’ own answer to bottling Summer. Drinking it was certainly a nostalgic moment for me — I was transported to an earlier time. A time when Fairfax’s Emmet Swimming was singing about Boones Farm Wine. In fact, Strawberry Hill from that “winery” was the first thing that came to mind when I stuck my nose in the glass. That’s not a dig at Rubaeus, either. The clear red fruit aroma brings to mind other nostalgia-packed beverages like a freshly poured New York Seltzer that I might have had in 1987. These days, that’s not such a bad thing. I mean, it tasted a bit like a strawberry Fanta — perhaps a precursor to the hard soda trend that’s dominating craft beer. I’m having a little fun with this whimsical brew, but it’s totally perfect for backyard BBQs and ice chests and warm nights that refuse to cool off. 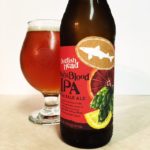 Another fruity IPA? Another citrusy sweet beer that subverts the hop flavors with orange juice sweetness? Nope. This is, as the Dogfish folks say, an “honest to goodness fruit-forward IPA.” Brewed with lemon pulp (or, if you would, flesh), blood orange juice and orange and lemon peel, Flesh & Blood balances Dogfish’s typically malty IPA with a complex array of citrus flavors. In here is the juicy pucker of the bright yellow lemon along with a pithy bitterness of rinds. Blood orange provides a particular mix of bitter and sweet that works in harmony with what tastes like a 75 Minute IPA — a super drinkable IPA that is neither too weak nor too strong. I will be honest, I was both excited to try this and wary. I mean, would it be another Beer To Drink Music To? A beer that underwhelmed, that was more fun in name and spirit? Nope. It’s a big, juicy (literally) IPA that also has a fun name and description. Let’s hope this one stays in their brewing schedule. 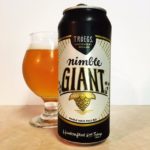 Brewed once a year, Nimble Giant is Tröegs’ way to kick off summer. Having a higher ABV than the entries above and being conspicuously unfruit-flavored is novel considering that four of my six picks are fruit-infused. Let me be clear, though, there’s a juicy fruitiness that is derived from the Azacca, Mosiac and Simcoe hops — tropical pineapple and guava. There’s also a nod to palate-destroying imperial IPAs with a piney dankness — a welcome twist after enjoying the fruity beginning of the sip. The 9% on the can means that there’s an alcohol-derived sweetness, but it’s never cloying. This might be more of a sipper than the rest of the beers listed here, but it’s just as satisfying on these days with 100º heat indexes. I suggest you do as Tröegs asks and #FindTheGiant.

Lastly, I want to remind you of a beer that I covered back in March: Green Flash Brewing Co.’s Passion Fruit Kicker. This tart, fruity wheat beer was tasty in the cool, wet Spring, but it takes on a whole new aspect once the hot, humidity of Summer arrives. Whether you find it in bottles or cans, this refreshing beer is just the thing by the pool or on the beach or even in the back yard.

A late addition that, for the time being, isn’t available in Arlington or anywhere else in Northern Virginia (that I’m aware of) is Silver Spring, MD’s Denizens Brewing Co. Southside Rye IPA. This recently canned rye ale is almost more of a red ale where malt and yeasty fruit balance hop bitterness with a hint of pepper from the rye. In fact, it was my beer of choice when writing this column. Check out their brewery in Silver Spring or find their beer on shelves or on tap around DC and Maryland.