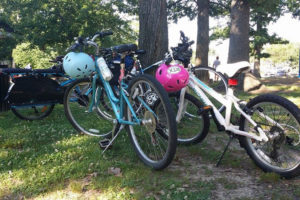 The Arlington chapter of a group centered around casual bike rides for families plans to lead a trek along George Washington Memorial Parkway this weekend.

A “Junior Park Ranger Ride” is set to kick off this Sunday at 9:30 a.m., according to Kidical Mass Arlington, the event’s organizers.

During the 60-90 minute trip, riders will hit several stops along George Washington Memorial Parkway, including the U.S. Marine Corps War Memorial, the Netherlands Carillon and Lyndon B. Johnson Memorial Grove. The ride will end up at Theodore Roosevelt Island, according to Kidical Mass.

The event will also include activities from BikeArlington and the U.S. National Park Service. All young riders will earn Junior Park Ranger credentials for the GW Parkway once the ride is complete, according to event organizers.