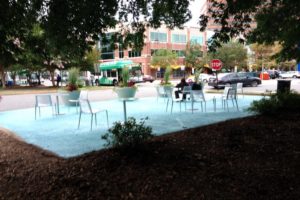 A “pop-up plaza” has opened in Courthouse.

Put up in only two days near the Courthouse Plaza surface parking lot, workers cleaned up the area, painted the concrete, and added plants and furniture, transforming it into a public square similar to larger efforts done in places like New York’s Times Square.

Its purpose is to show the public what the entire parking lot might look like if it were to be transformed into a town square under the “Envision Courthouse Square” plan.

The plan calls for putting the parking underground, thus making way for a large, open green space and some new development.

Join us today at 12:30 to celebrate the new #popupplaza and see County Manager Mark Schwartz paint the final square pic.twitter.com/YdxpC0oXLW

County Manager Schwartz fills in the final square of the #popupplaza under the Soldier's Tree at Courthouse Plaza pic.twitter.com/pLYTp8WEih