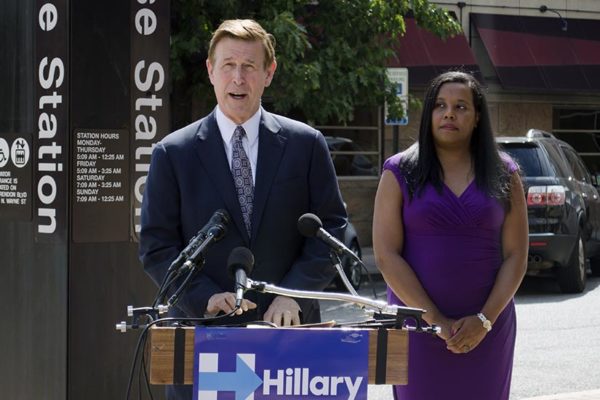 Speaking at a brief press conference outside the Courthouse Metro station, Rep. Beyer (D-Va.) said Clinton would make it a top priority in her first 100 days in office to break through Washington’s gridlock and make the biggest investment in jobs and infrastructure since World War II.

Her economic plan would add jobs to the economy via investments in U.S. infrastructure, Beyer said, including Northern Virginia’s “two great priorities” — Memorial Bridge and Metrorail.

Without more investment, Metro’s long-term capital budget and the deteriorating bridge — which just received a federal grant — would continue to suffer, he said.

“We know the incredibly important role that infrastructure plays in job creation, economic development and raising incomes,” Beyer said. “In Virginia, we expect our leaders to enact policies that help our economy thrive. Hillary Clinton is committed to building an economy that works for everyone in Virginia and America, not just those at the top.”

“Hillary Clinton’s vision is an inclusive vision where economic growth benefits not just those at the very top, but middle class and lower-income households as well, where investments are made not simply in the bank accounts of those at the very top of the scale, but in people across the income scale,” he said.

According to the Clinton campaign, an analysis by Moody’s economist and former McCain adviser Mark Zandi suggests that Clinton’s economic plan would create 271,000 jobs in Virginia, compared to a projected loss of 89,000 jobs under Republican nominee Donald Trump’s economic plan. (Trump updated his plan in a speech today.)

Not everybody was impressed with the mid-morning press conference. An ART bus driver, picking passengers up at a nearby bus stop, asked a news photographer what was going on. Upon hearing that it was a pro-Hillary press conference, and that the candidate would not be attending, the driver said he was voting for Trump, before driving off.