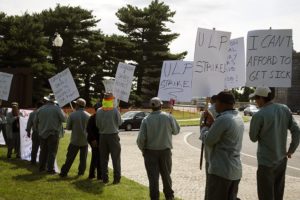 For the second time in a month, contract groundskeepers at Arlington National Cemetery have gone on strike.

The Laborers’ International Union says 30 of its members are striking to protest delays in negotiating a new contract, and for firings and discipline related to an ongoing labor dispute with Davey Tree and Greenleaf Services, which provide contract services to the cemetery.

Two Arlington County Board members joined the LiUNA’s first strike at the cemetery, in July.

In the second strike in as many months, Arlington National Cemetery grounds-keepers walked off the job today to protest extensive delays by their employers in negotiating a contract and the firing and discipline of workers who refused overtime.

The 30 members of Local 572 of the Laborers’ International Union have been seeking a contract for nine months with their joint employers, Davey Tree Expert Co. and Greenleaf Services.

The workers are asking for modest wage increases and paid sick leave. On August 1, workers engaged in concerted action, refusing to work overtime to protest perceived favoritism in the assignment of hours. The workers complain that only anti-union employees get steady hours throughout the work season, while the pro-union employees see their hours rise and fall depending on whether the employers needs them. The employers placed derogatory write-ups in the files of 15 workers and fired one, even though their action is protected under federal labor law.

“Arlington National Cemetery is a symbol of our nation’s strength and determination to stand for what is right,” said Larry Doggett, Business Manager of Local 572 and U.S. Marine Corps veteran himself. “It is shameful that the workers who care for the grounds are being treated with disregard for their fundamental rights and freedoms and subject to illegal actions for joining together.”

In addition to a contract, the workers are now seeking reinstatement of the fired employee and repeal of disciplinary action against the others.

The workers have won the support of Arlington County Board members, who joined them on their picket line when they struck on July 19.

Since May 2015, when the workers voted to join the union, they have been seeking to negotiate a boost to their average $13 an hour wage and for paid sick leave, but bargaining sessions have been repeatedly delayed or cancelled.

Davey Tree Co., based in Ohio, touts itself as the largest tree care company with 2014 revenues of $790 million.