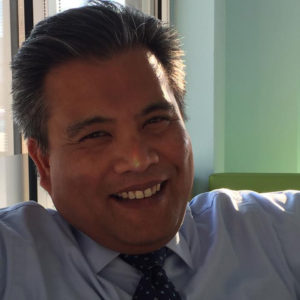 It was a proud week for Virginia when our Senator and former Governor Tim Kaine accepted the Democratic Party’s nomination for Vice President of the United States.

That same week was also one of shock and grief as we learned that Joe Montano, one of Senator Kaine’s key aides – and his staff representative in Arlington and across Northern Virginia – had passed away. Senator Kaine’s moving remarks at the Virginia delegation breakfast was a testament to the love that so many felt and feel for Joe.

I would like to put into my own words what the loss of Joe meant to so many people in this area – especially to Asian Americans:

Hundreds of friends and colleagues from all walks of life joined the Montano family amidst crying, hugging, laughing, and even dancing and basketball to bid farewell to Joe. Only Joe, say his friends, could pack a church and a high school gym to capacity; shut down major streets; have his Senator and boss, Tim Kaine, deliver a heartfelt eulogy for him; and have everyone in tears and laughter at the same time.

The outpouring of camaraderie, love, and support from Washington, D.C., through Northern Virginia, and all the way down to Norfolk and Virginia Beach in the wake of Joe’s passing has been nothing short of remarkable. But then, Joe was a truly remarkable person.

He was the guy whose laugh long preceded his entrance into a room. He was always the first to jump up to serve his community and the first to lend a hand. He brought people together. He was a uniting presence in the way he lived. And in death, he has united a community of friends and family from each facet of his wonderfully spirited, indefatigable life.

A proud Filipino American, Joe was passionate about social justice issues. He most recently served as Northern Virginia Regional Director of Constituent Services for Senator Kaine.

In a statement released shortly after Joe’s death, Senator Kaine said, “Joe was an outstanding representative of this office, enthusiastic servant of the people of Northern Virginia, and admired colleague by all who worked with him. We will remember him by his positive energy, tireless work ethic, and infectious smile.”

Joe’s best friend Marlan Maralit spoke of him with passion. “Joe Montano’s was a purpose driven life where his actions were explicit and not far from his vision for the world — a world where he was quickly becoming an emerging voice for communities fighting for a seat at the table.”

Virginia Delegate Mark Keam eulogized Joe on his Facebook page. “Joe was one of my closest friends and fellow foot soldiers on the battlefield of civil rights and progressive politics.”

At DAAV, Joe was our go-to guy. He was our sounding board, our adviser, our galvanizer, our rock. He was selfless and dedicated and he immediately put everyone at ease. He was the commanding presence in a room full of people, yet, he was quietly comfortable chatting with high school students.

He fired up volunteers the same way he fired up elected officials — like no other — with a passionate, loudly delivered call to action. He mentored and inspired the next generation, led by example, and encouraged them to give back to their communities. And he did it all with kindness and compassion – with that bright Joe Montano grin, never uttering a negative word.

With Joe’s passing, the Democratic Asian Americans of Virginia have not only lost our star community organizer and activist — we have lost our best friend. Joe is irreplaceable. We miss him dearly. Yet in his honor DAAV members look forward to building on his decades of hard work to elect Democrats at every level across the Commonwealth of Virginia and at the national level.

Maraming Salamat, Joe Montano! Thank you for your tireless service. Rest in peace, dear friend. Your spirit will live on with us. We will not let you down! #LiveLikeJoe #BeLikeJoe

Niharika Chibber Joe is a South Arlington resident. In 2014-15, she served as Secretary of the Democratic Asian Americans of Virginia.