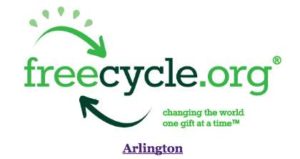 Freecycle.org is a website that allows members to give things away to neighbors for free. It’s like Craigslist, but only for free stuff.

The Freecycle group for Arlington has nearly 3,500 members and more than 550 items offered either for giveaway or as “wanted.”

Among the recent items: a replica of the Declaration of Independence, a broken necklace, a bunch of unwanted coffee filters and a rug that’s had black paint spilled on it.

But one particular, unique item on the site caught a reader’s eye: a life-sized poster of communist revolutionary Vladimir Lenin.

The “souvenir from Soviet times” is more than six feet tall and is in “very good condition.” It’s available for pick up from a home in the Lyon Park neighborhood, near Clarendon.

“Only in Arlington,” said the reader who spotted it.

Only in #Arlington, VA would someone be giving away a full-size #Lenin poster on #Freecycle. @ARLnowDOTcom pic.twitter.com/UyqHMa0FU6