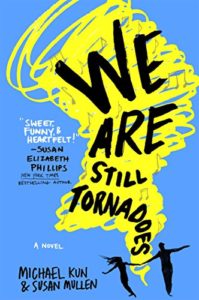 Arlington lawyer Susan Mullen’s journey to becoming a novelist began with an encounter with an old friend on Facebook.

Mullen reconnected with fellow lawyer and University of Virginia School of Law alum Michael Kun, who sought her help with what became “We Are Still Tornadoes,” a novel about best friends who follow different paths after high school. Kun, an author whose books include “The Locklear Letters” and “My Wife and My Dead Wife,” shocked Mullen with his writing proposal.

“I thought, ‘Why would you want to do that?'” Mullen said. “He’s a successful novelist, and I’ve never written anything before. We talked it through and basically agreed that we’d be honest with each other, and if it wasn’t going well, we’d just say, ‘Well this was fun,’ and move on.”

The novel centers around Scott and Cath, who grew up together in a small Maryland town. Through the use of letters between the friends, Mullen and Kun weave together a story of what happens when Cath goes to Wake Forest University and Scott stays behind to follow his musical dreams.

In order to keep the concept of writing letters back and forth a realistic one, the book is set in 1982, before online communication became widespread.

“It was a time when people wrote letters,” Mullen said. “It had to pre-date email because I don’t think that email has the same charm as writing letters, although members of the younger generations might disagree.”

To add authenticity to the missives, Mullen and Kun actually sent letters to each other throughout the writing process, with Mullen drafting Cath’s dispatches and Kun penning Scott’s notes.

Mullen and Kun discussed little beyond the novel’s framework and basic plot before starting the process, leaving the rest to the individual writer.

“We exchanged letters back and forth, and we just let it evolve,” Mullen said. “We surprised each other with the letters to a certain extent, and we would give each other a little bit of feedback along the way.”

The exchange of letters took over three years, something that Mullen attributes to both her and Kun’s busy lives as lawyers with families.

“I would only write when I had a significant block of time to really sit down and pay attention to do my best work,” Mullen said. “I really wanted to respect the process.”

When she was writing, Mullen’s oldest daughter was beginning her freshman year at Harvard University, giving her somebody to base the collegiate experience on. Both of her daughters also provided feedback in terms of how authentic the letters sounded. One major change was the inclusion of profanity, something her daughters felt came off as more authentic.

“Mike previously had a rule that he did not want his characters to curse because he wanted his daughter to eventually read his books,” Mullen said. “When my girls read it, they were like, ‘Mom, they have to curse, its just not realistic. It’s the way teenagers talk.'”

One challenge they faced while writing the book was finding a way to describe events that occurred while both characters were in the same location.

“You’re not going to write to each other about things that you have experienced together,” Mullen said. “It’s challenging sometimes to describe events with enough detail to be interesting to the reader and at the same time not include so much detail that its unrealistic from a letter-writing standpoint.”

At the same time, she said that the epistolary format helped make the writing process easier for her as a rookie novelist.

“I only had to write one letter at a time,” Mullen said. “For a lot of first-time authors, what stops them is trying to figure out what they’re going to say from start to finish.”

“We Are Still Tornadoes” is set to come out Nov. 1.