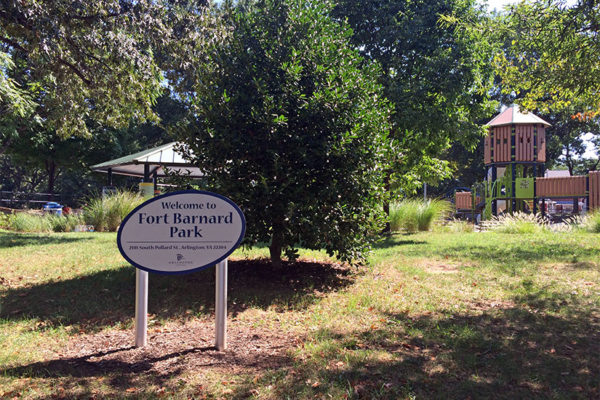 A “serial pooper” has left a No. 2 on the Ft. Barnard Park playground for the second time in as many weeks.

The ill-placed excrement was spotted this morning, conveniently while county crews were at the park for routine landscaping work.

“Unfortunately, the serial pooper struck again this morning,” a nearby resident told ARLnow.com. “This time it was not covered by a shirt, but a pile of human feces was found on the playground by some benches. County landscapers were already on the scene when it was found and called their office to arrange for cleanup and to discuss other methods to deter or catch the pooper. I guess this makes him the very brazen serial pooper.”

Arlington Dept. of Parks and Recreation spokeswoman Susan Kalish confirmed that feces was found and that employees promptly took action to remove it.

“Yes, we found some more this morning,” Kalish said. “It is being cleaned up. We’ve notified police, rangers and are also working with homeless advocates.”

Kalish relayed some bullet points from the parks department regarding the defecation situation, including the somewhat surprising revelation that poop is pretty common in parks.

This is unacceptable behavior.

When we know about it, we remove it immediately.

We regret this sometimes happens.

As of 11 a.m. this morning, it appeared that the latest droppings had been cleaned up and about a dozen children and caretakers were in the park, playing on the playground.

END_OF_DOCUMENT_TOKEN_TO_BE_REPLACED

More Stories
Signs, Equipment from Hard Times in Clarendon Are Up for AuctionArlington Pet of the Week: Tucker